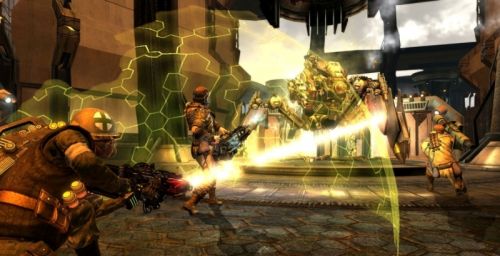 One of the biggest problems I have with Resistance 2’s co-op mode is the lack of any reasonable AI on the part of the enemies, and the easily identifiable spawn locations. It’s the tired old case of “pull a switch and enemies appear.” This would be fine if it happened only a couple of times per map, but it happens for every single map so they all start to feel like the same thing with a new palette swap. As far as the AI goes, don’t be surprised when a wave of enemies just runs at you shooting until either you’ve killed them or they’ve killed you. After that wave is done, prepare for the next wave that will play out much like the first. There are a couple of spots where it might seem like the enemies are flanking your group, but don’t be fooled. The enemies just spawned on either side of you and are running at you from both directions. The absolute worst offense I saw while playing was during one of the “boss fights.” The boss was separated from our group around the corner of a wall. If it had moved a few feet forward and turned left, it could have easily wiped us out. Instead, it just stood on the other side of the wall while we slowly picked it off.

The second issue with the co-op mode is that it all starts to feel the same. Instead of battling through a complete campaign with an overarching story and unique/different objectives to complete in each level, you choose one of six different maps that have different backgrounds, but the same goals and objectives to complete each time (i.e., run over there, pull a switch, run back over here, toggle a button, fight a boss, repeat). Any kind of story element is presented as a wall of text to read through while the map is loading. Thus, the co-op campaign plays out less like a complete, coherent story that you and your friends are tackling together, and more like a typical FPS multiplayer game with a kind of fun co-op system.

The cover art to Resistance 2 is split, with Lt. Nathan Hale standing in front of a semi-picturesque 1950s style diner and gas station on top, and a Chimera standing in front of the same scene, only destroyed by war, on the bottom. I found this depiction fairly symbolic of what Resistance 2’s co-op mode is like: ideal and fun one minute, horrifying the next. What’s really good about the co-op campaign mode is the way in which the three classes need to work together in order to achieve the goals of the map. The leveling system adds a certain RPG element that makes repeat playing almost an obsession, and matches are quick and easy to start. It’s fun, but what doesn’t work is just about everything else: from the enemy AI and repetitive objectives, to the network and local co-op issues that have been recently reported. Hopefully some of these flaws will be fixed through a patch, but until then, Resistance 2 stands less as a giant amongst co-op games, and more of an average Joe.

The Co-Op Experience: Play a unique cooperative campaign with up to 8 players. Each player chooses a class and is able to upgrade that class the more they play. 2 Players can Play Offline and join up with folks online for the full 8 player co-op experience.