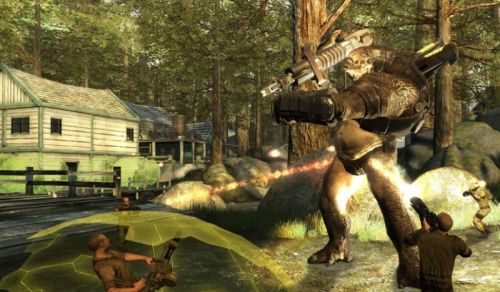 The first Resistance game marked a fairly successful departure for Insomniac from their usual puzzle-platformer franchises of Spyro the Dragon and Ratchet & Clank. Set in an alternate World War II history, British and American troops face a far worse enemy than the Nazis: an alien-like invading force known as the Chimera. Two years after the events of that game, Resistance 2 once again finds players in the shoes of Sgt., now Lt., Nathan Hale continuing the fight against the ever-growing Chimera threat. While the first game allowed two players to team up locally and battle their way through the story campaign (a feature that is unfortunately missing in this iteration), the sequel features a totally unique on-line co-op campaign where up to eight players can join in the fight. The result is something of a mix between a World of Warcraft raid, Call of Duty 4’s multiplayer experience leveling system, and, regrettably, monster closets.

For the co-op campaign, players assume the role of one of the three different classes: soldier, medic, or special ops. Players that are fans of the MMORPG genre of games will feel right at home with this particular dynamic. Just as in those on-line games, the soldier acts as the front line defenders using their shields to absorb the incoming fire of the Chimera; medics keep the players healed by using their Phoenix guns, which take the life from enemies and gives it to their teammates; and the special ops dish out the damage while providing the other players with ammo for their weapons. These roles are very clear-cut and have to be followed fairly closely if a group wants to clear a map. While this kind of forced team play might be hampering for some, as it certainly doesn’t allow much room for trying new things, I didn’t mind as it brought me back to the days of going on raids with my WoW guild. There are even huge bosses that require the group to work together in order to take down. Unlike WoW, though, if you end up with too many healers and not enough tanks, Resistance 2 lets the player change his or her class the next time they die and respawn. This is a very good feature to have as a lot of players are content with being the trigger-happy special ops class.

Similar to Call of Duty 4, players gain experience for actions taken, such as shooting/killing enemies, completing objectives, absorbing damage with the shield, healing allies, providing allies with ammo, etc. Once you gain enough experience in a certain class, that class levels up and gains access to new weapons and abilities. Written down, Resistance 2’s co-op mode sounds great, and when you play it, it is definitely engaging and fun… at least, for the first few hours. After that, however, things start to break down.