For starters, the fact that the NXE has none of the interface lag that the old blade system had is the best feature they could have possibly added.  While the blade system was serviceable for the console at launch, as their game/video marketplaces became more and more crowded with content, it became clear that Microsoft needed to figure out a way to display their data more intelligently.  Through a stroke of luck or brilliance, they managed to do just that.  While it takes a couple minutes to figure out where some things have moved to, you'll find that it's so much easier to browse content on the Xbox that it's a wonder we put up with the old system as long as we did.  The Party System is a wonderful addition, and being able to move from game to game without having to deal with setting everyone up repeatedly is quite a boon for social gamers.  Avatars are cute and add a lot of personality to the "experience", but ultimately, they appear to be more of a gimmick than anything else.  The biggest feature has got to be the new partnership with Netflix - this feature alone has made my wife really pay attention to the 360 more than ever, and I'll often catch her hopping into Arcade titles between episodes of Heroes.

Likes:  Netflix, no more interface lag, new achievement viewing system is a vast improvement, removal of some redundant items that cluttered each page
Dislikes: Stability of the Party System is dodgy at times, Netflix means my wife will hog my system if I turn my back, default channel is not what I'd set it to 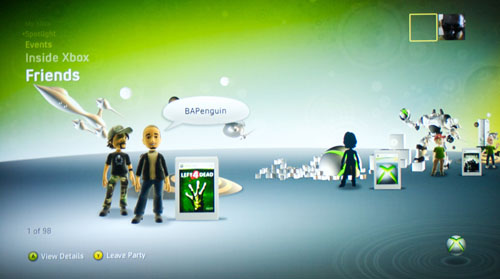 A latecomer to this generation of gaming, I was still pretty much satisfied with the "blades" system. I had a couple of minor gripes -- mainly the lag when opening the dashboard -- but had no real qualms. That said, the NXE is still a huge improvement, and a week after installing it, goofing around with the avatar customization and flipping through the channels to see what's new is still a welcome distraction for the easily distracted. I also like how your Gamerscore, number of friends online, and new message indicator are displayed in the upper right corner along with your Gamerpic. Something that I don't care for so much is the fact that all of your practical applications are packed into the functional-but-bland dashboard; the main navigation Channels are really just fluff. Thankfully, it's partially rectified by smooth and lag-free operation. I also wish they would allow you to sign in as invisible, which was promised in an update to the "blades" system. Final note: the Live Party system is truly the Mount Olympus of social gaming.

Likes:  Live Party, Avatars, smooth navigation, Events Channel, important info easily accessible.
Dislikes:  not all Channels are as practical as they should be, still can't sign in as invisible. 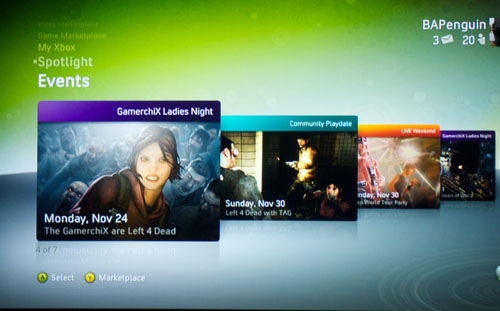 As you can see, there's very little you can complain about in such a monumental free update.  So enjoy it, and we hope to see you our Live Party and joining us for co-op night!