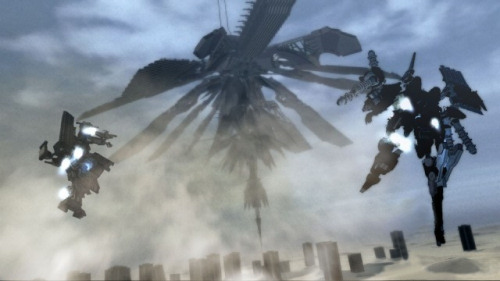 Armored Core has always held a special place in my heart, and after thirteen installments, they've finally introduced the ability to share my experience with friends. That's right, Armored Core is finally Co-op. I have to say, initially I was excited to be able to sit down and play through these missions with a friend, but how does it work, exactly?

From Software's Armored Core games have redefined robot (generally called “Mech”) combat in games, with a variety of weapons, armor, and fighting styles to choose from. Along with these customizable or upgradeable parts, and weapons, you're also given the option to paint any part of your mech however you please. Controlling your mech is a bit different than walking around as a character, as you'll use boosts to execute almost all movement – adjust your controls until you're comfortable with boosting, dodging, aiming, and shooting simultaneously, or even the single player experience is lost.

Co-op (or “partnership”) is brand new to the Armored Core series, so I'll try to be nice. However, I will preface this by noting how confusing and misleading their co-op menu system is. That is to say, there are two, very different ways to go about playing cooperatively with a friend starting in different menus. One of those ways works relatively well while needing some work, and the other is a mess that suggested co-op was a poorly designed afterthought.

First, the bad co-op, which is the exclusively co-op mode, located in the “multiplayer” menu from the start up screen. This co-op menu takes you down about 6 sub menus with lots of options that don't seem to effect anything, to a poorly designed lobby. The lobby allows players to chat, but no one can adjust their mech for a specific mission, so once you're in, you're stuck. Unless, of course, you want to backtrack 3-4 submenus and basically start over. Here's where my friend and I were kicked in the head; in this mode you can only co-op on missions that both parties have already completed. That's right, you can only play things you've both already played, and successfully finished. I'm pretty sure this isn't the point of cooperative gameplay, so I quickly became annoyed and wrote off co-op as “garbage” in this game.