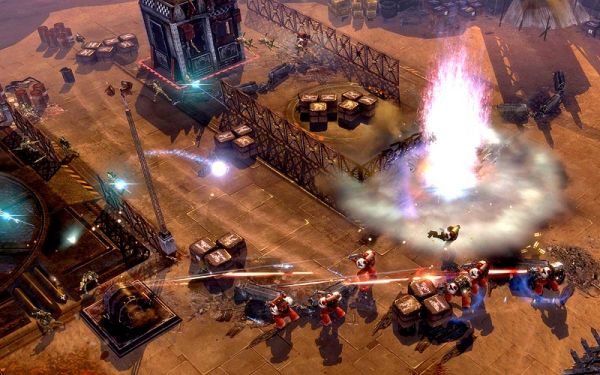 Things generally like to go BOOM in the game.

Co-Op in Dawn of War 2 is identical to the single player campaign, except player two controls two of the squads in battle.  As you work your way through the maps with your teammate you'll find that constant communication is key.  Every map ends up being a series of small skirmishes that when executed properly with a teammate are extremely satisfying.  Coordination is key - perhaps your teammate can lay down cover fire from the left and as soon as the enemy is pinned you launch your squad of assault marines right on top.  There's tons of possibilities that become apparent in these little battles that really make for a fun experience.   When your squad falls your hero is left to be revived either by your other squad or your co-op buddy.  This keeps the action flowing, and forces players to focus on taking control points to bring in reinforcements.

The co-op mode does have a few glaring flaws.  For one players don't get to bring experience or items back into their own game.  It's sort of understandable, because you are only controlling two squads in co-op if you were to bring them back into single player you could potentially have a very unbalanced set of four squads as well as a really underpowered hero unit.   The other downside I noticed is there's no co-op match making, so you'll need to know the name of your buddy to play with before jumping into a game.  Finally progress isnt' saved for player two's single player campaign, but you can continue playing through the entire game in co-op and earn all the achievements and unlocks as you would in single player.  As long as you stay with the same partner you can essentially treat the co-op campaign as your own. 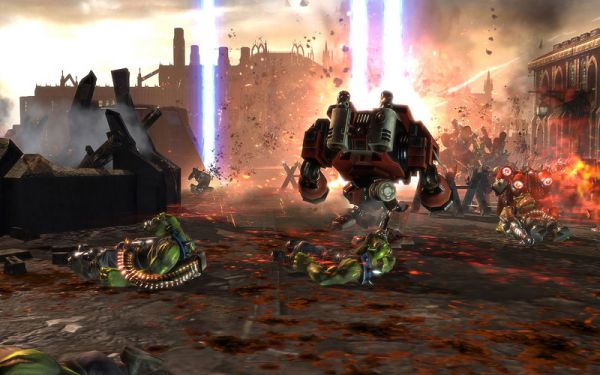 That red on the ground?  Yeah that's not corn syrup.

Dawn of War 2 went out on a limb and did something different for its single player and co-op campaign.  Relic combined an RTS and with RPG and made it a unique and gritty experience.  While purists might be a little upset, I think they broadened the appeal of the game while still keeping it a hardcore gamer's experience.  While some of the shortcoming of co-op are disappointing, the overall fun factor of the game is second to none.  Dawn of War 2 truly is one of the best games to hit PC in a long time - one that can be enjoyed either by yourself - or better yet with a friend in co-op.

Update: Our impressions of the Dawn of War 2: Chaos Rising expansion.

The Co-Op Experience: The Co-Op ExperienceDawn of War 2 allows players to drop in and out of the hosts game, though they'll be required to start from the beginning of the mission. Each player controls two squads of the four total.