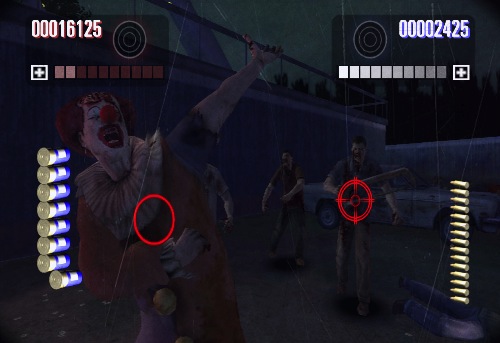 So the game looks good, but how does it play? By using the Nyko Perfect Shot Wii remote attachment, or the Wii Zapper, the shooting works very well. As an on-rails shooter, the nunchuck isn't used at all, so the Wii Zapper is a bit bulkier than necessary, but using no attachment is very uncomfortable, and may cause a bit of wrist cramping after just a few levels. Sure you and your co-op partner may not look as cool holding a WiiZapper in your living room as the guns from the arcade - just shut the blinds.

Multiple successful hits in a row give you combos that eventually lead to a "Goregasm", which boosts your score on the in-game leader boards, and just sounds so cool to achieve. While it would have been nice to have online leaderboards, punching your name in to replace all of the Agent G's on the list is still a pretty good feeling. The score is also a nice way to force the other player to keep up with you in a non-aggressive way, as combined co-op scores earn you money, and more spots on the leader boards. Earn money to buy and upgrade weapons for use in the game, the bigger weapons create more effective and interesting enemy kills. 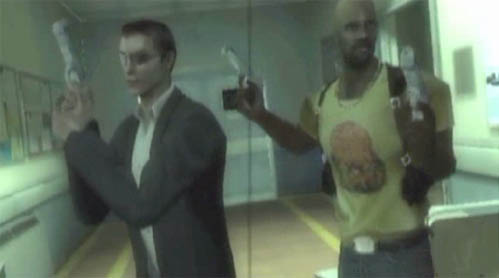 How much depth do you expect from a game like House of the Dead? Hopefully it's not more than about 3-4 hours worth, because that's all you'll really get from the story mode. After you complete the 3 hour game, you unlock a "Directors Cut" of the story, which allows you to play through a second time with a slightly amped difficulty which requires players to cover each other while inevitable reloads happen. There are more bonuses for saving civilians and more gold brains to collect with a sprinkle of a few more enemies. There are even a few mini games which can be played with up to 4 players, and include target shooting, saving survivors, and a survival horde mode. All of this adds up to a pretty decent showing of the first original House of the Dead console title.

The Co-Op Experience: Take on the undead in the latest House of the Dead title from Sega. The game is designed from the ground up for the Wii, and is meant to played with you and your buddy in traditional lightgun fashion.