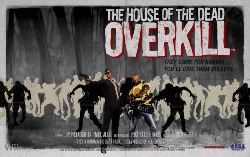 Overkill is a unique version of House of the Dead, as the censors have taken a vacation on cursing, yet sticking true to the gore fest that is House of the Dead. Each level starts with a brief bit of back story about a mad scientist named Papa Ceasar as well as the games protagonists; Agent G, Detective Isaac Washington and eventually Varla Guns. The narration, cut scene presentation, storyline cheesiness, dialog, and even the grainy “film” feel in game all seem to pay tribute to B horror films, especially the ultra-campy Grindhouse series. You wouldn't know this by just playing single player, as it limits the campy dialog and in game bantering with player two.

Speaking of sound, there are quite a few er, “unique” music tracks that can be unlocked by progressing through the game, now with increased necrophilia. Unfortunately the sound levels seemed a bit wonky on occasion while playing, which was somewhat distracting. Player two was overpowered by player one in most of the gun battles, and even one side of the dialog was oddly quiet in game. I turned on subtitles to try to get the full effect of the back-and-forth bantering between the players, but the subtitles only apply to the cut scenes, not in game dialog. 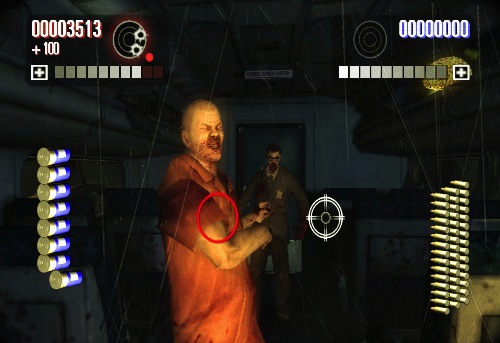 If you're like me, you expect some quality gore shots with your zombie, mutant, and undead media. Overkill is no exception to the rule - If you shoot an enemy in the arm, they'll be missing arm. Shoot them in the chest and pieces go flying. Shoot them in the leg they'll fall over and shoot them in the face and get a fountain of blood. Since the damage brings a variety of deaths, be creative to take mutants down for maximum variety. Bonus items are also scattered throughout level, like gold brains. By collecting these you'll unlock art, videos, and music – this works best with a friend, since one person can hold back a horde, while the other takes aim at the items.