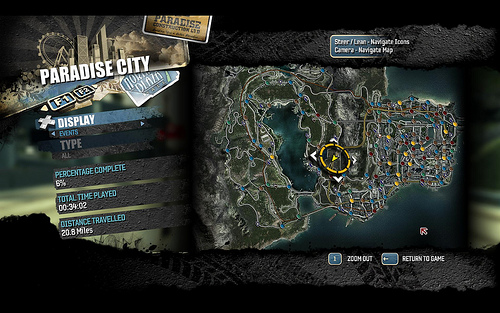 Now, let's discuss the co-op for a bit.  Last weekend, the Co-Optimus staff all got together in Paradise City.  This was my first experience with the game in co-op, or multiplayer, for that matter.  Co-op is a bit hard to describe, but generally takes the form of simultaneous challenges.  One challenge had us all working together to get five or more seconds of air time in jumps.  Another asked each of us to achieve a full 360 spin off a particular cliff.  These challenges had less of a co-op feel; basically, it was simultaneous individual effort, and not co-op.

A few other events were more cooperative.  One had us all attempting to get 3000 feet of jumps, combined.  I preferred this to the other co-op challenges, since the slowest player (yup it was me) didn't hold back the whole group.  Probably the highlight of the evening was the co-op road rage events.  All the players were herded to one location, and had to score fifty take downs to win.  It was hilarious to see us all "working together" to crash each other into the nearest wall or building.  These latter two co-op challenges were the best, for sure. 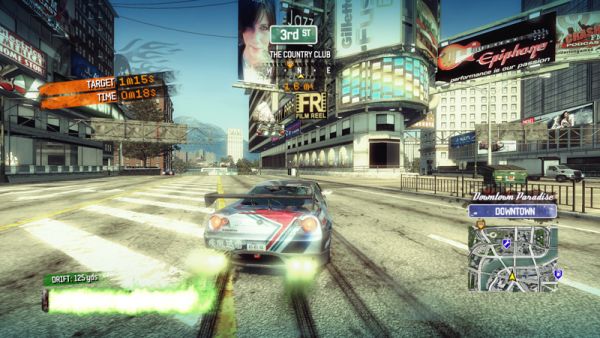 I should say something about the downloadable content for the game.  There are lots of features that have been added since the game was launched, like the motorcycles.  Several of the events and challenges we played were not available at the game's launch.  The best content is the special cars.  We downloaded the Legendary Cars pack, and it was absolutely worth it.  The Time Machine is extremely fast, far quicker than any of the standard cars we unlocked.  The Ghostbusters vehicle is built like a battleship, very tough and hard to take down.  KITT and the General Lee are just as cool, though a bit more balanced compared to other cars.  Nick bought the Toy Cars Pack's  monster truck, and not only was it small and hard to hit, it was extremely durable.  Watching the Time Machine get taken down by anoversized Stomper... it was hilarious.

Burnout Paradise is a good, solid game.  Even to me, as a racing game n00b, it was quite enjoyable and well worth the purchase.  The multiplayer is very good.  In particular, some of the competitive modes like Marked Man are totally fun.  Unfortunately, the co-op challenges don't really provide the same sense of working together that you'd find in Left 4 Dead or Gears of War.  This is primarily due to the nature of racing games; there's only so much you can do together when you are in separate cars, after all.  I wholeheartedly recommend the game for its single player and multiplayer experiences, particularly for the low price.  The co-op isn't as strong, and a split-screen option is sorely needed.

The Co-Op Experience: Race with up to 8 players to complete various cooperative challenges. For instance all the players must work together to achieve a certain amount of jump distance. Advanced challenges have players performing simultaneous stunts.