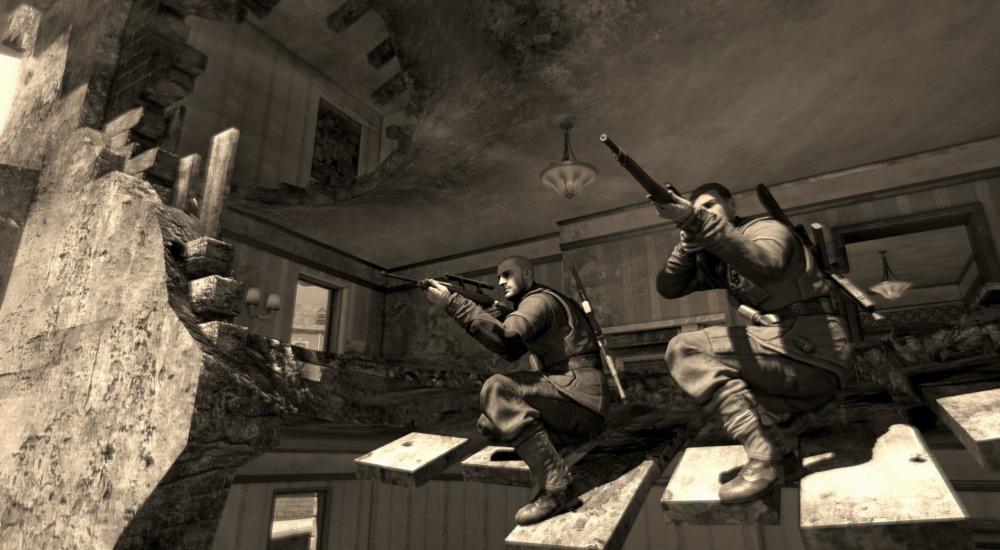 Sniper Elite V2 functions as a retelling of the first Sniper Elite, introducing the world to incredibly charming and memorable WWII sniper Karl Fairburne. Okay, so he’s not much of a character, but he certainly knows how to kill a big pile of Nazis. Timeline is a bit nebulous in this series, with V2 actually taking place later in the war than III and 4. Karl’s mission is to rescue the German scientists responsible for the V-2 missile program for the Allies before they fall into Russian hands.

The V2 campaign consists of ten missions, all playable in 2-player online co-op, plus a single-player prologue (tutorial). Players will progress through large, mostly linear levels, sneaking to avoid alerting Nazi soldiers, sniping lots of enemies, and completing various objectives like planting bombs and eliminating vehicles. The levels are far less expansive than those of Sniper Elite 4, but they’re still quite enjoyable. Sniper Elite’s slow pace and emphasis on setting up perfect long-range shots never gets old. V2 Remastered promises several improvements, starting with remastered graphics. The enhancements primarily include improved texture maps, lighting, and particle effects. According to Steam user reviews, the Remastered version doesn’t look much different than the original PC version. But on Xbox One X, the game certainly outshines the old Xbox 360 version by a wide margin. If there had never been a V2 game and this came out today, nobody would think it looked old at all. Console players can also choose whether the game prioritizes frame rate or resolution, ensuring a sharper or smoother experience throughout.

Photo mode is the biggest addition to V2 Remastered. At any time during gameplay, players can pause and activate photo mode. From there, you can adjust the camera angle, zoom, contrast, and filters. It’s quite similar to the excellent photo mode found in the Forza series. The game doesn’t actually save your photos, though – not on consoles. You’ll have to use your console’s screen capture feature to save and share pictures. Photo mode is available even in co-op games. While one person enters it, the other can choose to keep on playing. But when the photo mode player closes it out, both players confirm the return to normal gameplay, oddly. The single-player campaign and competitive multiplayer now allow players to select from eight different characters, with the seven new characters having first appeared in Rebellion’s Zombie Army Trilogy. Frustratingly, the new characters can’t be selected in co-op games! When playing cooperatively, both players are stuck as boring old Karl Fairburne. It makes no sense for characters to be selectable in single-player and competitive multiplayer but not in co-op.

Finally, V2 Remastered includes all of V2’s previously released DLC, including the "Assassinate the Fuhrer" mission. The four DLC-specific campaign missions are found under the single-player Challenges menu. Therein lies a massive oversight on Rebellion’s part – the previously single-player-only DLC missions were not made co-op for V2 Remastered! There’s really no reason to exclude a second player from those missions, given that the entire campaign works just fine with two players. Perhaps if enough people complain about the issue, the developer will fix it in an update. Kill Tally: A ten-wave horde mode with five selectable maps. Oddly, the Xbox and PlayStation versions lack any Kill Tally-specific Achievements/Trophies. This mode would have more staying power if V2 Remastered supported 4-player co-op like the sequels do.

Bombing Run: An objective-based mode with a scant three maps. The team must scavenge 5-7 parts for their escape vehicle before the area gets bombed by the allies. When only two parts remain, a five- minute countdown timer starts and enemies start appearing in full force. Overwatch: Possibly V2’s best co-op mode, Overwatch features five maps and casts one player as a binocular-carrying spotter and the other as the sniper rifle-wielding marksman. The marksman is restricted to an elevated area while the spotter must complete objectives on the ground. The dynamic of one player marking enemies while the other person snipes them down is addictively asymmetrical. This is the only co-op mode in which teammates can’t revive each other, but the team can restart from the last checkpoint if someone dies.

The co-op modes are all lots of fun, but the menus used to get to them are obtuse and antiquated. From the main cooperative menu, the only two options are Quick match and Create a Private Game. How can anyone quick match into a game if there’s no option to host public games? On Xbox, the game occasionally fails to create a lobby on the first try, forcing you to try creating it again. Sniper Elite V2 was always a great game, and V2 Remastered gives a new generation of players a chance to experience it. The lack of co-op support for challenge missions and character selection in co-op is a real drag, and I wish the non-story co-op modes supported more than two players. But there’s still plenty of fun to be had shooting Nazis full of holes with a friend.

The digital versions of Sniper Elite V2 Remastered sell for $34.99 on consoles, slightly less than the retail versions. The digital Xbox One game is cross-buy and cross-play with the Windows 10 version. Steam owners of V2 can upgrade to V2 Remastered for $9.99. If you're interested in picking up the game and would like to support Co-Optimus, you can head over to Amazon via this link and get it from there (console versions only).

The Co-Optimus Co-Op Review of Sniper Elite V2 Remastered is based on the Xbox One version of the game. A code was provided for review purposes.

The Co-Op Experience: Two players can take on the entire campaign together online. Co-op mechanics include the ability to revive a fallen comrade or spot enemies with your binoculars, marking their locations for both players. Other co-op modes include Killy Tally (survive 10 waves of enemies), Bombing Run (hunt for vehicle parts before time runs out), and Overwatch (one player snipes while the other spots enemies and carries out objectives).