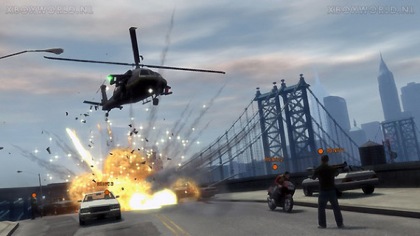 Grand Theft Auto IV is probably going to be one of the biggest games released for consoles this year. With anticipation and controversy high, the first true sequel to Grand Theft Auto 3 hit the Xbox 360 and Playstation 3 on April 29th. Much to the disappointment of co-op fans, the game doesn't feature a cooperative mode with integrated story, instead Rockstar Games decided to include 3 co-op "scenarios" which you can play with up to 4 people online via Xbox Live or PSN. We'll go through each of the 3 modes and describe the scenario as well as give our thoughts on each. These modes are accessed via the cell phone and chosen under the multiplayer menu. First up is Hangman's Noose.  The scenario places you and your friends guarding a crime boss who's on a grounded plane at the airport. Soon after the mission starts you'll be assaulted by police and SWAT teams. Your job is to get a vehicle and get the crime boss out of there alive. This is actually one of the more difficult co-op scenarios as the firefights are fierce and there's very little cover. It's wise to work together, and possibly even steal two vehicles if at all possible so one group of folks can block during the getaway. There's some great dynamic stuff here that adds some re-playability, and the sheer amount of bad guys make team work crucial. Next up is Bomb Da Base II.  This scenario has you trying to take down an armored vehicle to steal explosives, followed by a helicopter section in which you need to blow up a rival shipping company's cargo. Again this can be played with up to three other people, though there's not much dynamic here for actual teamwork. Taking down the vehicle isn't very difficult and is straightforward enough, but blowing up the ship provides a few different options. We actually attempted to land one person on a nearby crane with the helicopter to provide sniper support as we charged the ship to blow it up. Finally there is Deal Breaker.  Finally there is Deal Breaker. This scenario has you and up to three friends taking down a group of drug dealers and stealing their cargo without leaving a trace. Of course things aren't simple as the mission ends with a chase sequence of some of the crooks getting away. One really neat thing here is the randomness factor. While sometimes you'll see the dealers run in a car or van, we actually had them hop in a boat for an exciting pirate-esque water battle to end the mission.  The game also features a free roam mode in co-op which basically lets you do whatever you want, even though there's no mission structure. Think of it as one giant playground of destruction. It's really a shame that Rockstar didn't include a proper co-op mode. While the three available options are nice, they offer limited re-playability. The free roam mode offers infinite re-playability - but there's a lack of any guidance. It would have been great to have a scenario editor available to create custom cooperative matches. Perhaps in the upcoming exclusive Xbox 360 downloadable content we'll see a co-op mission pack. We can only hope.

The Co-Op Experience: The game offers a few cooperative options. It should be noted that playing through the single player story is not available in co-op play. Hangman's Noose You and your 1-3 friends must take down the cops guarding a crime boss, Kenny, who's on a grounded plane at the airport. There's a few options here to tweak the mission and make it dynamic. There's also some cut scenes and dialog to go along with it. BOMB DA BASE II Description: A rival export business has a ship sitting in the docks waiting to be loaded. You must steal the explosives gain access to the ship and plant two bombs, one on the bridge, the other in the hold. Make sure you're not on the ship when she blows. Those are Mr. Petrovic's orders. Deal Breaker A co-op mission that requires players to assault a construction site captured by enemies, then chase a group of enemies before they escape. The game also features a free roam mode in co-op which basically lets you do whatever you want, even though there's no mission structure. Think of it as one giant playground of destruction.