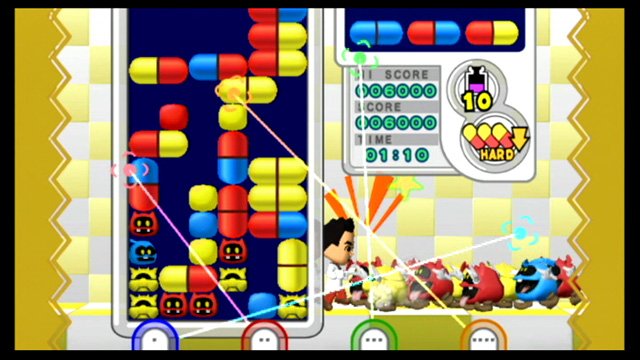 Nintendo has a long history of releasing games on several different systems.  Whether this is a bad thing or not largely depends on whether you are a fan or critic of Nintendo franchises in general.  Put me firmly in the "fan" camp.  I have no problem with this recycling, as long as the games are good, which in Nintendo's case, they usually are.  Who could argue that buying Smash Brothers three times was a waste of money?  And Tetris for the DS was absolutely worth purchasing, though I'd played it on the original Game Boy for years.  Let's consider Dr. Mario Online for a moment, then.  It's been available for the NES, Nintendo 64, and for the GBA TWICE, and recently it hit the WiiWare service.  Is it worth checking out, given the addition of a co-op mode?

As you know, Co-Optimus is dedicated to the co-op aspects of games, and so we will ignore the single player aspects of the game as well as Vs. mode.  Unfortunately, this is where the "online" parts of the game are.  The co-op mode, Virus Buster, is only playable locally.  Given the classic nature of the game, we won't get into the gameplay much during this review, as most gamers are already familiar with Dr. Mario.

Four players can play in Virus Buster mode at one time.  Each player controls a small targeting reticle of a different color, which is always connected by a line of the same color to each player's icon on the bottom of the screen.  I found the line to be somewhat distracting, but I suppose it might help less experienced gamers keep track of where they are. 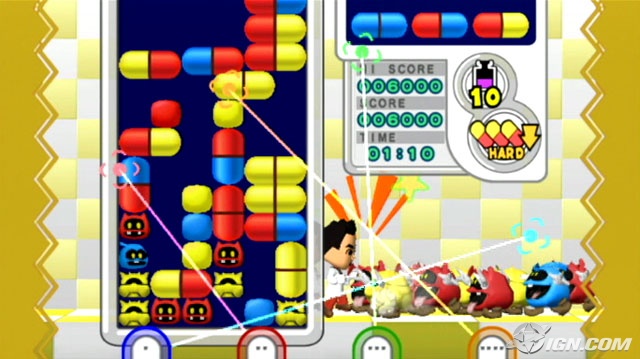 We should talk about the controls, which use the Wii remote's pointer functions.  Players can move pills by holding A and dragging them around, and rotation is accomplished by pressing A or B.  At the beginning of a level, one pill drops at a time, but eventually up to three pills appear at the top of the screen at once.  One nice touch is that pills in the queue can be rotated, which was handy, especially early in a level, when only one pill is dropping.  Generally, the controls work fairly well.  However, there is a slight delay when a pill is held in place before it locks down, and if you let off early, the pill might move or rotate on you.  This was extremely irritating, as you can imagine.

For me, Virus Buster got very frustrating, very quickly.  I am a big fan of the Wii remote, but for a fast paced puzzle game, controls should be precise and reliable.  The Wii remote is neither of these, regrettably, at least in this game.  While working together with your co-op partner, you have to discuss things, and plan ahead.   When a pill doesn't rotate just right, those plans are wrecked.  This is a bad thing for co-op!  I got really ticked off at my poor son, who was doing his best but screwed up every once in a while.  On the other hand, many times I'd mess up myself!  The yelling and arguing got overwhelming in a hurry, so much so that my wife came in and had to lay the law down!  (Insert henpecked husband joke here.)  We quit playing shortly after this; Virus Buster didn't feel really cooperative, to be honest.

If I had to pick one word to describe the co-op experience of Dr. Mario Online, it would be 'frustrating'.  The controls are not very reliable, which is a game killer in a puzzle game.  It is hard to work together, too; many times it felt like we were working against each other.  I think Virus Buster could be (hectic) fun, but I wouldn't call it a true co-op game.  Overall, I'd say Dr. Mario Online is a good value for it's single player and vs. mode, but I wouldn't recommend it for co-op.

The Co-Op Experience: The Virus Buster mode is where you'll find 4 player co-op. Multiple pills spawn at the top of the screen, and the simple grab/rotate controls allow you to move the pills freely left, right, or down (up is still locked, since this is a gravity-based puzzler at its core) to position the pieces. Each player has their own agenda, each fighting over what piece to use where.