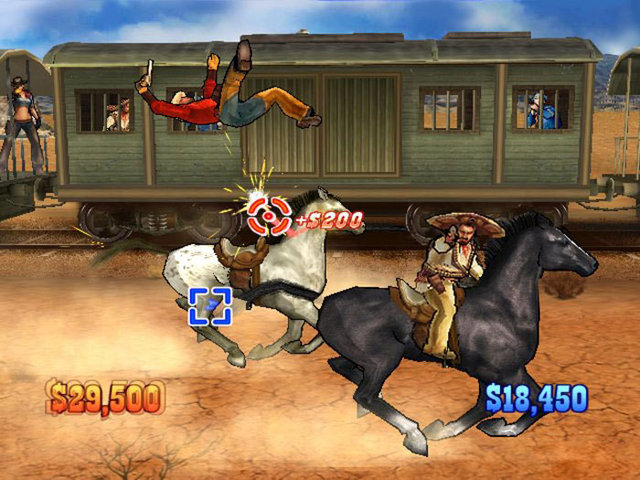 Ever since the Wii Zapper was released, I have dreamed of the perfect co-op shooter for the Wii.  Link's Crossbow Training, while entertaining, was, sadly, only single player.  (If you don't count the 80s style "taking turns" multiplayer, that is.)  Resident Evil: Umbrella Chronicles and House of the Dead 2&3 weren't for me, as I mainly play co-op with my two kids, who are a bit young for either of those two titles.  So, when Wild West Guns was released, I downloaded it immediately.  I've since had two co-op sessions, one with each kid.  Unfortunately, I'm still looking for the perfect co-op shooter for the Wii, though Wild West Guns might be worth a try for lightgun style shooter fans. 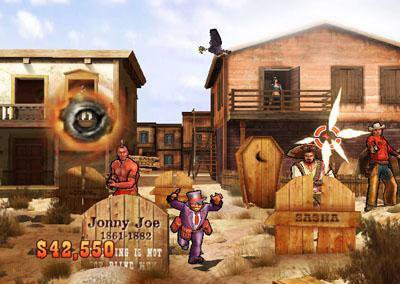 Wild West Guns is comprised of six levels, with three sections each.  In the first two sections of each level, you shoot targets.  Balloons, bull's eyes, sombreros (think of skeet shooting), vultures attacking rabbits and juggling tin cans are all represented.  In the last section of each level, it's you and a buddy versus a generic cast of Western themed baddies, including a short dandy in a purple suit, various cowpoke types, a Native American or two, and, I kid you not, a cowgirl wearing a belly shirt.  The environments for these bandit showdowns are either a train, in a graveyard, or inside a saloon.  You'd better like these levels, because they repeat quite a bit, and there is little variety at all.  All balloon levels play the same, for instance.  The train levels are the worst at repetition, only introducing a bit of variety near the end when there is a limit to how many times you can get shot. 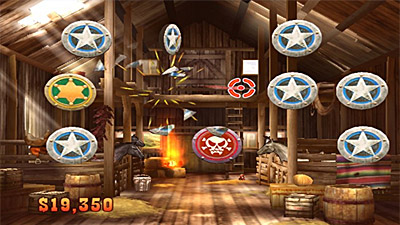 Levels are unlocked by earning points.  When I played with my 7 year old son, we tried the first level 5 times and never passed it.  Scoring is almost entirely dependent on your chain, which grows when you don't miss.  Even after five tries, we were well short of the threshold to cross the next level, and I was sick to death of the first.  However, when I played again the next day with the 13 year old, we beat the game handily, earning platinum badges for each level, in just over an hour.  It's almost trivial to score hundreds of thousands of points when you focus on mot missing, as opposed to trying to shoot everything that moves.  It's a bit counterintuitive, to be sure, but once we figured it out, it was smooth sailing. 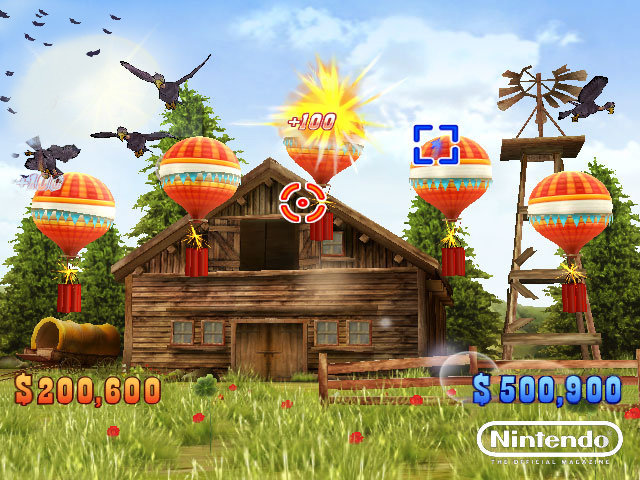 Wild West Guns is short, and repetitive.  However, it is fun while it lasts.  We were hooping and hollering like mad when playing.  But once it's done, and you've earned the best badges, there's not much reason to replay.  There is a hard mode to check out, and there are single player "achievements".   In 2 player versus mode, play is exactly the same as in co-op, save for the fact that it keeps track of your score separately.  All in all, there's some fun to be had here, but not very much.  I'd have felt better about the game had it been less than $10, but considering there are titles like Geometry Wars 2, Super Stardust HD, and Dr. Mario available for that price, Wild West Guns seems overpriced.

The Co-Op Experience: An American Old West-themed light gun shooter, the game sees the player shooting at targets ranging from vultures, balloons and flying sombreros to armed robbers, angry gold diggers and renegade soldiers across a number of environments such as saloons, cemeteries and a speeding steam locomotive. The game features 6 levels across two difficulties, with 3 challenges in each. The game also supports the Wii Zapper peripheral.[WIKI]