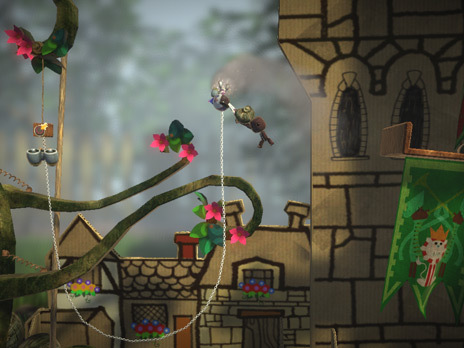 “Coopetition” is also likely the reason behind the second letdown: tethering. No matter if you’re playing locally or on-line, players are essentially forced to stick together. If an errant Sackperson wanders away from the rest of the group and is off-screen for more than 5 seconds, they die. Sure they’ll come back at the next waypoint you hit, but that means that’s one less chance the group has of completing the level. An argument could be made for not including split screen with local (although I’m not sure what it would be), but having this kind of mechanic for on-line play where each player has his or her own screen is just baffling. Hopefully, this will be a mechanic that might someday get patched and become more of an option instead of a required feature.

Teaming up with another player to make your own level can actually be one of the more cooperative experiences in LittleBigPlanet, assuming you both have the same vision in mind. Creating a level takes some practice, but once you get a grasp of all the tools and objects that are made available to you as you complete the levels, it’s fairly easy to accomplish. It’s also fairly time consuming, no matter how much practice you have. This is where having a buddy can really make a difference. While Rome wasn’t built in a day, two players working together can create a Rome themed level (complete with a dancing Nero, if they so chose) in less than a couple of hours. Both players have access to the same objects and materials and can work simultaneously in placing them around the level. Thus, if one player is working on making the Colosseum, the other player can be working on the Parthenon. While the screen does allow you to zoom out to a significant enough degree that you don’t exactly feel tethered to the other player, if you want to get up-close to do some detailing, then the other player has to come over to you to fit on the same screen. Again, a split screen would work wonders here.

I mentioned earlier that I haven’t played a platformer like LittleBigPlanet in a long-time. Frankly, that statement should be amended to say that “I have never played a game like this.” There is something so indefinably charming, completely fascinating, and utterly engaging about this game that seems to bring out the creative side in players. Scrolling through the dearth of levels already posted by a community, some of which were made within less than a week of the game being released, you can find levels that break the traditional platform genre and introduce elements from other archetypes. In the time I’ve spent with the game so far, I’ve seen at least half a dozen levels that were nothing more than people using the game’s tools to recreate well-known songs in a Mario Paint-type fashion; I played a game of Tetris; I solved a murder mystery; I visited Silent Hill and ran from Pyramid Head; I was Batman. LittleBigPlanet is just a week old but already it’s beginning to show just how creative a gaming community can be when giving the opportunity. The best part about this game, though, was knowing that I could play each of those levels with a friend or work with them to make a world unlike anyone has ever seen, with all the unique and creative elements that we can imagine.

The Co-Op Experience: The online servers were shut down in September 2021. Until then it was possible to play with four players not only locally but also online.. With up to 4 players working together to solve puzzles, build worlds, compete in races, and more; LBP is an incredibly ambitious title.