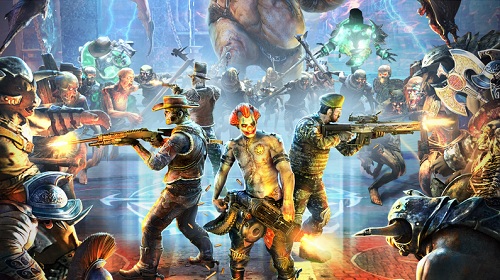 April is becoming a busy month for cooperative gaming. The co-op arena shooter, God Mode is coming out in less than two weeks. This is the game where you play as a dead guy and you have to fight through the "Maze of Hades" to redeem yourself. There are guns, and upgrades, and character customization, and a narrator that sounds like a demonic take take on an obnoxious homosexual stereotype.

We've shown you the teaser trailer and a gameplay trailer. Today we have a behind the scene video from developer Old School Games. The video also features some new gameplay content. The game looks interesting, especially when you consider the price.

God Mode supports four player online co-op and four player local co-op via LAN. It will be available for download on PC and XBLA, on April 19th for 800 MSP, or $10. It will most likely drop on the PSN whenever the PS Store updates after the 19th, which I think is the 23rd.