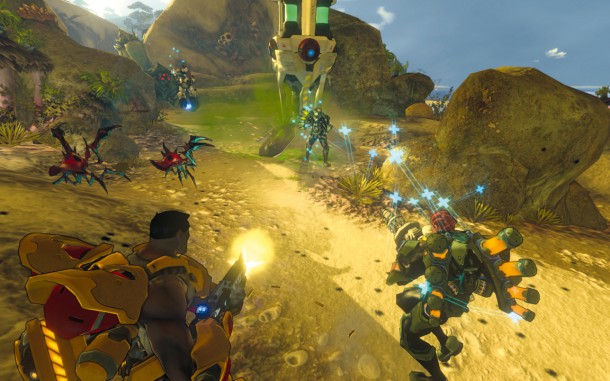 Get ready everyone, because Red 5 Studios has just announced that Firefall’s open beta will begin in mid-summer! Just in case you missed your chance at some free gameplay this past January, the majority of gamers will be able to see what this epic 5-player co-op, free-to-play, open world shooter is all about first hand.

Millions of fans around the world will be able to access the Open Beta for Firefall beginning on July 9th, 2013. Not only that, but Red 5 has laid out the final stages of the Closed Beta tests AND released an Open Beta FAQ to give players unfamiliar with beta tests a chance to join in the action and be involved. James Macauley, Vice President of Development at Red 5 Studios, happily announced the news to the world:

We’re incredibly excited to be nearing what we consider to be the most important stage of Firefall’s development – Open Beta. For us, Open Beta isn’t a traditional ‘marketing beta’, but rather an opportunity to include many more players in our community-driven development process. We’re looking forward to welcoming these new players into the community and continuing to build an amazing game together.

Up until when the Open Beta goes live, Red 5 will continue to pump out updates and new additions to the game, leading up to a more “fleshed out” Firefall open world when the beta finally hits. Here’s what they have planned for future content leading up to the beta:

Anyone can view the latest progress on Firefall’s beta access through Red 5’s new website: http://www.firefallthegame.com, as well as read up on the Open Beta FAQ here for all the questions you might have. Players can also grab their immediate access to the Open Beta (along with exclusive rewards) by purchasing the “Founders Pack” at: http://beta.firefallthegame.com/founders. This offer is in limited quantity, so get moving if you want the early access.

If you haven’t already, we highly recommend checking out our co-op impressions of the closed beta! We absolutely loved Firefall from what we saw, so we expect great things to come out from the game’s co-op mode come July and its official release later this year.