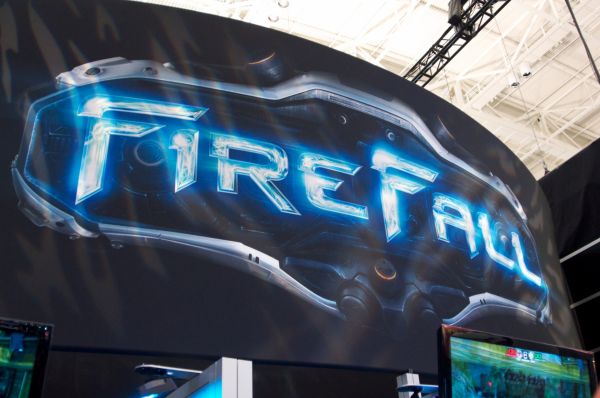 This s#!t like Tribes yo. That was the official one sentence description given by our own Mike Katsufrakis after playing Red 5’s upcoming free shooter Firefall. It should come as no surprise then that the game’s lead designer, Scott Youngblood, was also the lead designer on Tribes 1 and 2. Trust us when we say this is a really good thing.

At PAX East, Red 5 was showing off one of Firefall’s versus modes. On display was a 5 versus 5 deathmatch style game set in a beached area littered with pirate ships. Also on display was the game’s spectator mode - turning the game into a kind sport complete with overlay graphics and announcer. We were told that this competition and ranking would be a driving force for Firefall - we’d see tournaments and ladders driving players to further gain experience with their character.

Characters in Firefall are tied to your battleframe. These are how you can customize and build your player types in the game, these persistent builds will be switchable during any of the matches and missions depending on the goal at hand. You can add different modules like weapon enhancements, backpack enhancements and armor enhancements into your battleframe to make your character. Leveling up will grant you more slots, but we were told that there’s always going to be way more enhancements available than you have slots ensuring unique experiences for each character and player. This all sounds a bit RPG-ish, and it definitely is, but Firefall is most definitely action oriented. Mike chose to play as a Medic class which has abilities like heal, overheal and revive. There’s also abilities that co-op between classes, overdrive for instance when applied to an assault class gives them infinite ammo for a short period of time. This “co-op between classes” is prevalent in all game modes and can definitely tip the tide of battle. But as with any good strategy, there’s a counter, and in this case there’s a recon class that can counter an overpowering medic/assault duo with something called cryo-shot - it’ll drain the medics power and slow him down essentially splitting up the pair for easy pickins.

On the co-op gameplay side, Firefall is going to have a persistent world that not only has a story - but also has elements that directly affect resources in the game. Players will be tasked with holding certain areas, and if/when they fall - you may lose access to vital upgrades.

For any “free to play” game - most worry about exactly what they’ll be paying for. According to Youngblood, Red 5 won’t be charging for for more powerful weapons or upgrades, but instead focus on “value added” items like color and paint customizations and options for player armies. There also may be items to purchase that help players gather resources quicker and therefore can upgrade themselves quicker.

The team is still hoping to release the game later this year and with the quality of what we played, we don’t see any reason we won’t see it. Mike’s going to tell you a bit about that experience now.

While we are primarily interested in Firefall’s cooperative modes, only the 5v5 Team Deathmatch mode was playable on the show floor. After a quick poke about the controls with the default Assault battleframe, I switched to a Medic to see how the game’s support roles felt. Anyone who has played Team Fortress 2 will feel right at home, as your heal operates in much the same way. You can also overheal a teammate, giving them a temporary boost to health. Red5 has thoughtfully given the Medic access to an assault rifle as well, meaning a skilled player can fight their way out of a bad situation.

As an enormous Tribes fan, I felt immediately at home while playing Firefall. Though recent games such as Halo Reach and Killzone 3 have included jet packs, nobody has gotten close to the sweet spot that the Tribes games hit, but Firefall more or less nails it. Jetting your way around the map feels natural, and still has that exciting risk vs. reward feeling, as you are more or less easy pickings for a good sniper. The ability to toggle to a third-person view at will definitely help players gracefully make their way around the map, and I will assume most players will choose to pop in and out of first-person depending on what they’re doing.

Taking a player down doesn’t kill them right off. They’ll bleed out, similar to Gears of War or other games, as is the fashion these days. You can choose to spend a few extra rounds to end their misery, or line yourself up for an execution move. Choosing to execute gives a nice “F**k you” to your victim, but also leaves you a sitting duck for other players. Choosing to leave them alone runs risk of an enemy player reviving them, or a Medic using their defibrillator ability to pop players instantly back into the fight.

Unfortunately, I didn’t get much time to experiment with the spotting or class abilities, but during my time with an Assault battleframe, I got to try out the Afterburner, which dashes you quickly in whatever direction you’re pointing (great for vertical escapes), and the Crater, which launches you up in the air, and back down to the ground for a massive AOE attack. They were immensely satisfying, and gave the game more of its own identity, as powers like these are usually stripped from competitive shooters in the name of balance.

I was very pleased with what I played, and can’t wait to try out the co-op modes when Firefall releases (hopefully) later this year.