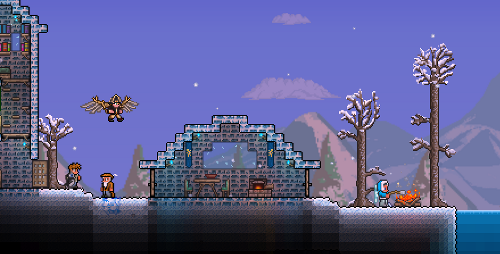 It's beginning to look a lot like the opposite of Christmas, what with the warm weather and sunshine and all. Terraria doesn't really care what the weather's like, though, and it's going to add a little winter cheer whenever it darn well pleases. Artist Jimmarn recently revealed screenshots showing a snow biome along with underground ice caverns that will be part of the next update. When that update hits is anyone's guess (June?), but it's going to be a massive one.

Some helpful Reddit users have collected every hint dropped about the update in a single Google Doc. Along with general gameplay and interface updates, mob tweaks, and new artwork, the update is going to add ice blocks, snowballs, waterfalls, rain clouds, cactus armor, evil turtles, and lots more. Excited yet?