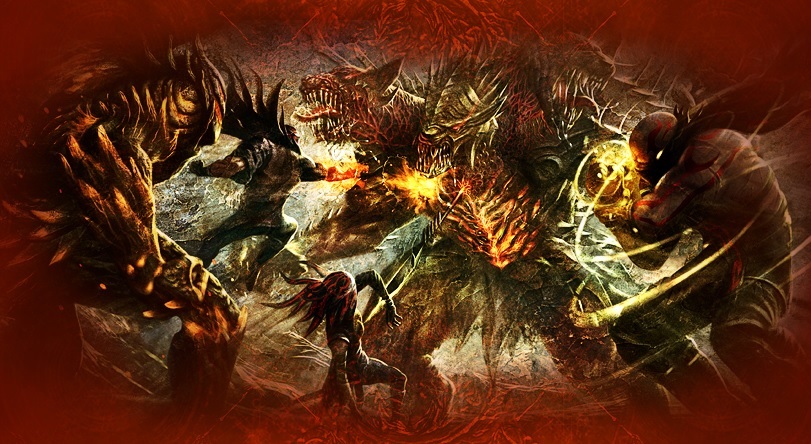 I was talking to Nick the other day and I let it slip that I had put around 25 hours into the Soul Sacrifice demo. And I don’t mean the Japanese version that came out months ago. Somehow, between playing and writing about all the games I’m supposed to be playing and writing about - and doing my part in the benevolent dictatorship my wife and I hold over a household full of pugs and children- I managed to play the Soul Sacrifice demo for an entire day (not in one sitting). It’s been out for less than a week. Embarassing, I know.

He suggested I write up some impressions, and I told him I don’t really have the time, because I’m too busy Grave Clodding the Cerberus in the nuts.

So now, one day later (that’s six hours of playtime later, according to my save file which says I’ve now put 31h15m52s into the game) I’m going to make the time and write up some impressions for the Soul Sacrifice demo.

I thought about getting into the details of Life and Soul Essences, Sigils, Boosting, and Fusing, but that’s better left to a review or walkthrough. I’ll just cover some of the basics. I’ll offer up some of my play experiences mashed-up into a single encounter in a "This Week in Co-Op" article I’ll post later today.

I’ve put over 30 hours into the Soul Sacrifice demo in less than a week, so it’s doing something for me. I would consider myself an expert, but my crappy skills present a different reality. Anyway, if you’re on the fence on this one, or you played a little and put it down, maybe this will spark your interest. So. Many. Spells. The real bummer is that you can only equip six at a time.

The demo is made up of 10 stages, six single player chapters followed by four multiplayer pacts. All levels are repeatable and can be farmed for offerings, the items used to create spells. You can finish some stages in a few minutes, but the later ones can take up to a half an hour to complete, especially if your team isn't working together (on the flip side, once you know what you’re doing you can solo the toughest level in half that time). Since save files carry over to the retail version, people are farming like crazy. I’m finding full lobbies at any time of day or night.

The level cap is set at 20. Once you hit it you can respecify your life and magic levels and try out different combinations of defense and offense. High defense earns you a Divine Arm, whereas high magic power results in a Dark Arm. Your arm alignment will impact the effectiveness of stat boosting sigils once you’ve acquired them. (A Divine Arm will add a 10% boost to homing magic from the Hunting Sigil I, whereas a Dark Arm II will get a 15% boost.) I’ve rolled Dark Arm III and Divine Arm III, playing everything between a glass cannon and a tank.

I haven’t hit a cap on the offerings yet. I’ve discovered 49 different spells and multiple duplicates. Some offerings, like the weaker projectile attacks, can be used several times in a single battle. Others, like summons, can be used only once. Offerings are automatically restored at the end of each battle. You can use duplicate offerings to boost each spell up to three stars in the demo. This increases the amount of times you can cast a spell in an encounter.  You need eight of the same offering to boost a spell to three stars. The demo has 50 different savable loadout slots for quick selection in cooperative lobbies. The full game is supposed to have hundreds of spells.

If you choose to save a human character after vanquishing their monster form they will become available to you as an AI companion. You can have up to two AI companions accompany you in the four co-op pacts. They are available only in SP mode. (AI does NOT fill in slots if you choose to play with other people.) I’ve earned six different AI companions in the demo, and each of them can be leveled up. They will learn more spells as their affinity grows for you. If you replay a level and choose to sacrifice a sorcerer you can choose not to have their fate rewritten, retaining them as an ally, yet still keep all the essences (XP) and offerings you earned from that level. Hanging out with the AI.

The combat seems to focuses on timing, counters, and using the right elements when appropriate. You can mash your way to victory in the early levels, but player coordination and timing become essential to victory in the later stages of the demo. Don’t simply conjure your favorite axe and go to town. Limited offerings means there's a lot more strategy to the longer fights, and communication is key. Voice chat over the Vita helps with this, but the in-game text system works, too.

The theme of salvation versus sacrifice permeates the entire game. Each creature has an interesting, if at times, troubling back story. You can delve into the lore provided by Librom (that’s the talking book at the center of the story) or forego the formalities and focus entirely on the combat. At a glance it may seem shallow, but there’s some depth to it. Some people might be put off by the streamlined mission layout and combat, but I rather enjoy the style, especially on a handheld.

Another thing I find interesting is the lack of permanence to your actions. Everything is replayable and reversible. Your alignment can be adjusted, sigils can be exchanged, and offerings can be restored if you destroy them by over casting in combat. I don’t know if the full game will allow players to be so free in their decisions. We’ll have to wait until the full game comes out next week.

So those are my impressions of the demo. If you want any more information just ask me a question in the comments section. I’ve spent a lot of time with it. I’m sure I’ll be playing some more. If you own a Vita I highly encourage you to check it out.

Soul Sacrifice supports four player online co-op and four player local co-op. It will be coming to the PlayStation Vita on April 30th. To get a better idea of how the co-op works, check out "This Week In Co-op: Soul Sacrifice with Randoms," which will post later today.