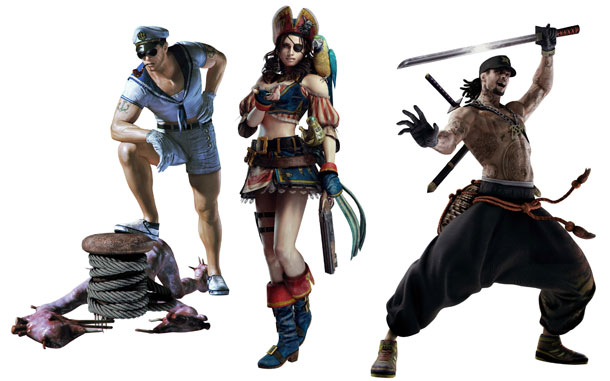 Resident Evil: Revelations has been successfully released for the console crowd as well as the PC. For a read about the impressions of the PC version of the game, take a look here. It is nearly a perfect port of the original game that was released for the 3DS, for better or worse. In true Capcom fashion, there has been talk about unlockable costumes and future DLC for Revelations.

If you ever wondered what Chris looked like in a skimpy sailor outfit, well your dream has come true. Capcom has announced that they have built hidden costumes into the game that will add a bit of incentive to go through Raid Mode and the campaign on various difficulties. The three hidden costumes include Chris as a sailor, Jill as a pirate (argh!), and Keith as a ninja. While they don't alter gameplay, they are there to unlock for your...viewing pleasure. Or not. Your decide.

In other Revelations news, the latest Case File that was dropped by Capcom has unveiled the future DLC that is planned for the game. The first DLC are weapon mod packs that will allow weapons to be upgraded. They are called the "Resistance Set" and the "Enhancement Set." They will each include six weapon upgrades. Both of the packs will be available on June 4th for 160 MSP. Another set of DLC will bring some rather strange new characters to Raid Mode. They include "Rachael Oooze" and "Lady Hunk," and they will be up for grabs on June 11th to the tune of  240 MSP. Finally, there is another mystery weapon upgrade pack that will upgrade weapons for Jessica, Jill, and Parker. This final set will be available June 18th for 80 MSP. Resident Evil: Revelations is available now for the PC, Xbox 360, and Wii U. It has a cooperative mode called Raid Mode, where players can team up to take down enemies and earn better equipment and abilities. Raid Mode supports cooperative play with two people both online and through LAN. Take a look below for the obligatory launch trailer.