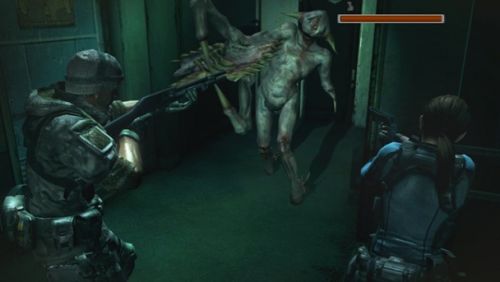 As a smartphone gaming enthusiast, I don't feel as much need for a 3DS system as I would have a few years ago. In fact, there are only a few third-party 3DS exclusive titles I really long for: Resident Evil: Revelations, Code of Princess, and the upcoming single-player opus Castlevania: Lords of Shadow - Mirror of Fate. Well, the 3DS is pretty popular, but game makers can obviously reach a much larger audience by branching out to actual consoles. If the Korean ratings board is to be believed, Capcom has wisely decided to expand RE: Revelations to the Xbox 360 and Playstation 3 sometime in the near future.

The ratings discovery comes via an astute NeoGAF poster who notes that the Korean ratings board has outed several unannounced games in the past. As such, there is a very good chance that Resident Evil: Revelations really will get the big screen treatment. We can't know whether it will be a downloadable or retail title, though Eurogamer guesses the former. Me, I wouldn't be surprised if Revelations also saw a discounted retail release, in Asian markets at least.

Resident Evil: Revelations offers a more traditional survival horror experience than the last few console Resident Evils, although it does allow players to move and shoot simultaneously like RE 6. It also packs a 2-player co-op Raid Mode with numerous short levels to play together. While the 3DS game supports online co-op, it lacks any way for players to communicate with each other. An Xbox 360 and Playstation 3 release would likely rectify that problem, to say nothing of potential graphical improvements. Plus, these ports will allow me to delay my 3DS purchase a little longer, which should make my wallet thankful.

Co-Optimus will watch for any future Revelations news like a hawk seeks tasty mice. In the meantime, check out our 3DS co-op review to learn more about the spooky  title.