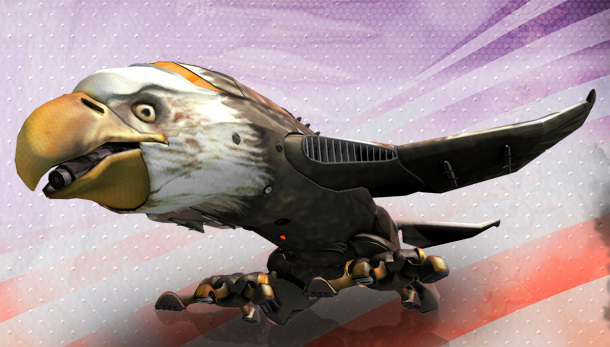 Everyone knows by now that Saints Row: The Third totally changed the atmosphere of the franchise on so many levels, and it’s continuing this trend into the next game of Saints Row 4. For those of you that pre-order the game and grab the special “Commander in Chief Edition”, you will be getting some extra outrageous, but totally patriotic DLC items to continue the ridiculousness.

Developer Volition informed the world that the special edition will contain some pretty hardcore United States DLC bonus items that includes some new skins and weaponry. Take for example, the all-purpose, death-machine known simply as the “‘Merica”, boasting mini-guns, rocket launchers, machine guns, and flame-throwers in one badass weapon (American's love their guns, right?). Use it while flying on a special jet with a sleek, avian theme called the ‘Screaming Eagle’.  Shoot dozens of missiles out of its talons at your enemies, all while sending out a sonic boom waves from its beak to stun things. Finally, top off your love for the U.S. of A. while donning the ‘Uncle Sam’ suit. Essentially, you’ll be the movie “Team America” while in this game. Saint’s Row 4 will be here by August 20th in North America for the Xbox 360, PS3, and PC, which is perfect for those of you who may be late to the 4th of July festivities.