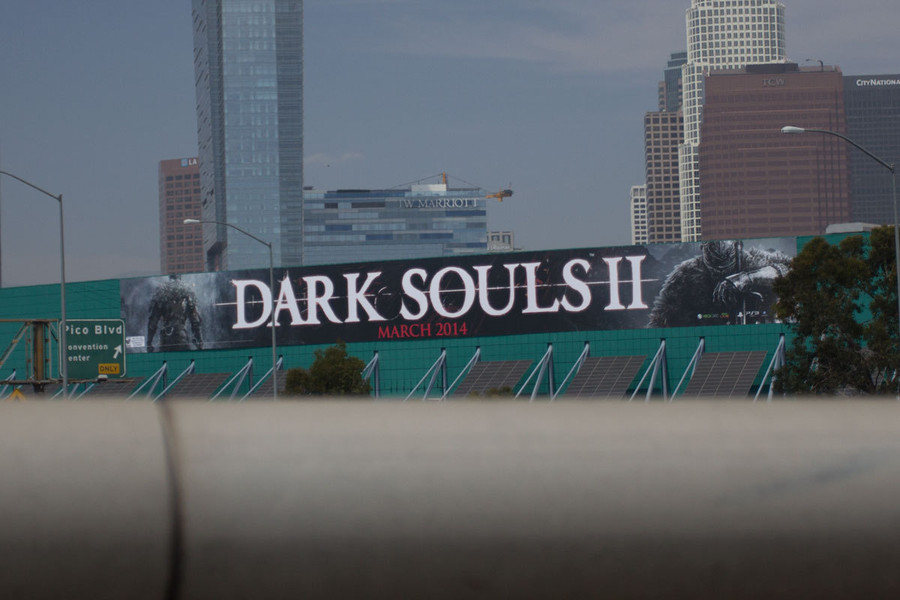 With E3 approaching quickly the monolithic advertising banners begin to shroud Los Angeles' downtown buildings with promises of a brighter future for video games. Last week a Dark Souls 2 banner was captured in a voyeuristic photo draping over the LA Convention Center, along with "March 2014" lingering at the bottom in blood red text.

If the first two games in the series weren't enough, we can see from the Dark Souls 2 trailers we are going to get battered, bloodied, and killed many, many times. 'Prepare To Die' doesn't even begin to describe it. Although there has been no information provided, Namco Bandai has confirmed that Dark Souls 2 will be out in March 2014.

What do we want to see out of a Dark Souls sequel? New enemies and environments are obvious, but let's get to the details. Possibly another co-op partner? Perhaps From Software will show mercy on players and include an easy mode where you can have regenerating health. Not likely. There has been talk from the developers that they want the game to be more accessible, without sacrificing what makes the game special (and why so many masochistic gamers love the damn games).

From recently finished their 'Shield Design Contest' on Facebook, and some of the results are stunning. Capra Demon shield, yes please! Check out some of the entries from some dedicated fans with gross amounts of talent: So prepare yourselves, next spring Dark Souls 2 hits and is bringing a cavalcade of pain with it. At least we know when we need to buy a new controller. Praise the sun!