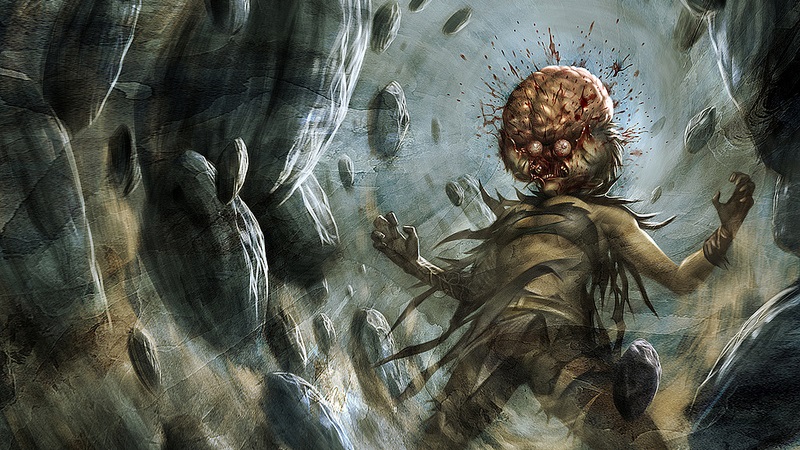 Soul Sacrifice will receive it's second update of free DLC next week. On June 11th the Dwarf and Ogre Archfiends will be added to the Librom, along with eight new missions, or pacts. If it's anything like last week's "Headless Knight and Starved Citizenry" DLC you can expect two discovery pacts and six battle pacts.

The new content's battle pacts will most likely feature two introductory missions for mid level players, two tougher missions for advanced players, a Gemini level showcasing both new bosses, and a 10 star battle for some proper essence farming. I have no idea if this is what we'll actually get, but that's what the last free update included, and it seems like a good formula. Why change it?

PlayStation Blog included a brief back story on each character. If these seem a little sparse, don't worry, both of the new bosses should get proper entries in the Librom, similar to those of the other Archfiends. Dullahan and Behemoth both received new Lore passages when they were added last week. There were once three men who did nothing but drink from morning until night. They were always the drunkest people in any tavern, and would argue and fight with other customers over the smallest thing. Having lost their jobs at the mine where they worked, the men had no source of income. The only things they owned were their well-used hammers, which no-one wanted to buy. Their drunkenness and destitution was a cause of great concern to anyone who saw them, but the men themselves seemed happy enough. This happiness would not last, however. Before long, the men had spent the last of their money…

Do any of you Soul Sacrifice veterans see a problem with this back story? How are we going to have a boss made up of three dudes, when all the other Archfiends are made up of one corrupted sorcerer? Are we going to get three allies if we save this soul, or should I just shut up and sacrifice the bastard? In a kingdom of some note, a woman was appointed palace chef for the first time in its history.

Once a simple town girl, she rose to such heights by applying all kinds of knowledge to her food. Not only did her cooking taste delicious, it had the power to cure illness and soothe the heart. Several years passed until, for some unimaginable reason, she was thrown in a dungeon to await execution. Lying in her cell, she had time to reflect on her life thus far.

The Ogre is a bit of a disappointment, since it looks like they simply slapped a chef's hat on the Minotaur. Oh well. Maybe it will have some crazy new special attacks. I can't be that disappointed. It is free, after all.

Soul Sacrifice is out now, exclusively on the PlayStation Vita. It supports four player online co-op and four player local co-op via an ad-hoc connection. More free DLC is expected to come in the weeks ahead.