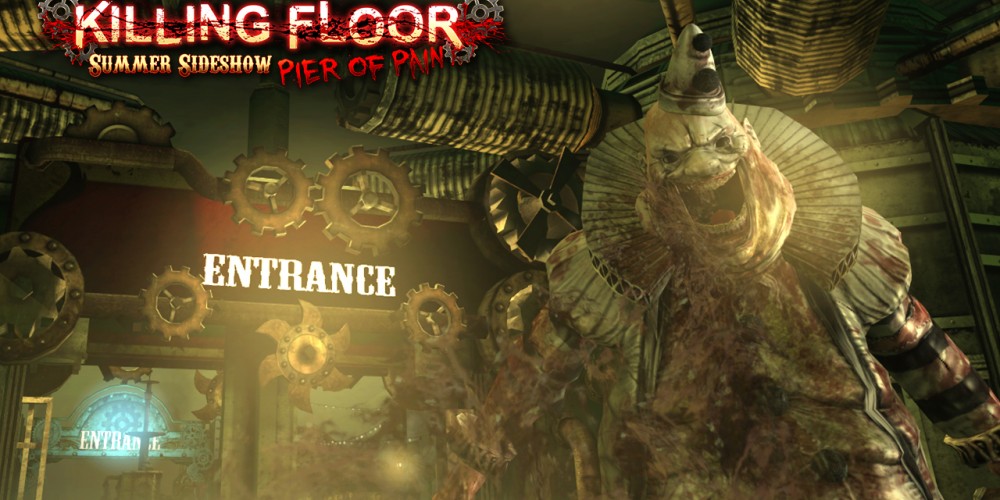 Killing Floor's annual Summer Side Show is in full effect.The FPS zombie thrasher has been well supported by developer Tripwire Interactive for years, and this summer is no different. The free to play event actually started up last Wednesday, but most of the Co-Optimus crew was knee deep in pre-July 4th frivolity by the time we got the news. Exploding skies and what not. We've got some killer new screens and a juicy new video with all the details.

Let's this get this out of the way: Killing Floor is free to play until July 11th, so start downloading it now if you're interested. It's a cooperative FPS that features wave-based maps and a new objective-based mode for up to six online players. It's been out since 2009 and it's good summer fun. Check out our Co-Op Review of the core game, or just watch this trailer below to get a taste of the bloody action.

The concept is simple: Kill all the zombie bad guys.

I'm looking forward to the new objective modes. Wave-based survival doesn't do a lot for me. I need more of a goal than simply existing. I'm a complicated zombie hunter, I guess. Players will be able to edit their own maps if they're feeling more creative than destructive. After the free promotion ends on the 11th the Steamland Pier of Pain event will continue until July 23rd. During that time you can earn new achievements and unlock Steampunk Mr. Foster and Steampunk Mrs. Foster as playable characters.

If you simply MUST spend more money there are three new DLCs as well. Mrs. Foster is available as a premium character for $2.49. There are also Golden and Steampunk weapon packs available for $3.99 each. These items are on sale for 50% off, as are all of the other Killing Floor DLC packs untill the 11th.

If you dig your time with Killing Floor you can pick up the full game for the gravely low price of $3.99. You can even pick up a six pack for your best zombie blasting friends for $19.99. This sale will end along with the free to play promotion (the 11th), so get your wallet ready now.