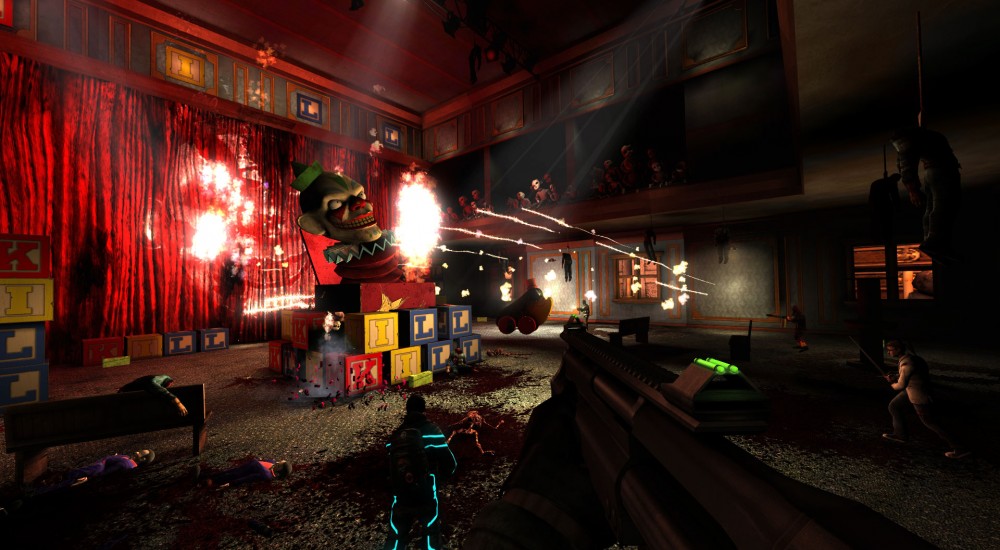 Few games enjoy the longevity of Killing Floor. Released in 2009, Tripwire Interactive's "co-op survival horror" enjoys relevancy in no small part due to Developer support. Killing Floor enjoys updates and events throughout the year, and the spookiest holiday can't be forgotten. For the second year running, KF is unleashing the Hillbilly ZEDs on your British Special Forces until November 3rd. The Redneck-themed mutants/clones are far wackier than your standard bunch of zombies; but this particular horror is a double feature.

Come for the Hillbilly Horror. Stay for the Toymaster.

If dodging banjos isn't quite scary enough for you, the new Toymaster map might be the fright you've been looking for.

Check out the Halloween Trailer.

This event introduces two new maps into the Killing Floor geography. First up is Club Clandestine, which is currently packed to the brim with bumpkin zombie nightmares. The second map is Devil's Dollhouse, which might be the freakiest map Tripwire has ever produced. Instead of knifing a trillion zombies, you and your squad are pit against merciless dolls who are eager to eat all of your skin. Surviving waves of puppet onslaught means you meeting face to face with the Toymaster himself, which is probably not destined to be friendliest of exchange.

Tripwire Interactive is eager to get Killing Floor into as many hands as possible. For the duration of the Halloween event, they've hacked the $19.99 price tag down to $4.99. They've also slashed character pack prices, giving us the opportunity to play as a giant chicken at a discount.

The Killing Floor Halloween event, and all the accompanied sales, end November 3rd.