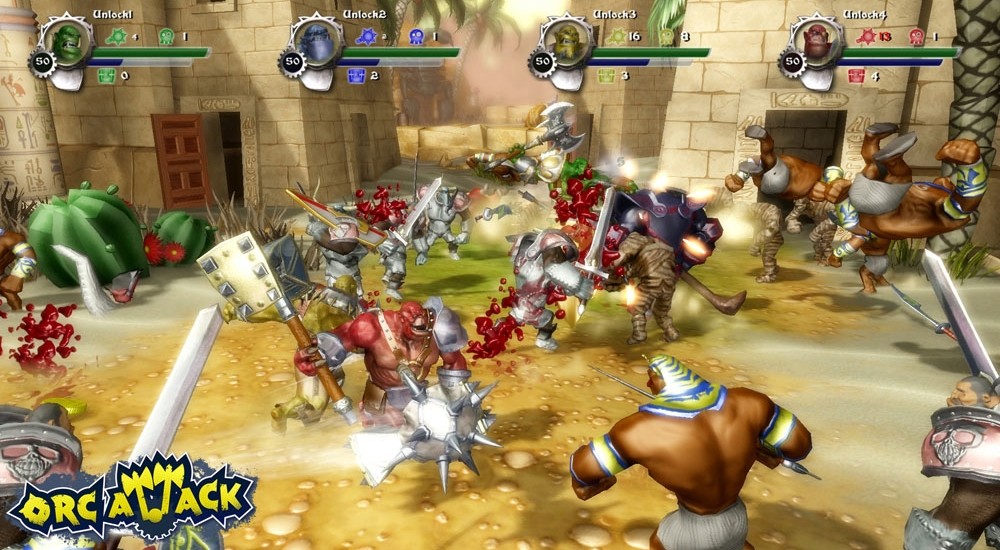 I'm sorry.  I lied. I ran out of fart jokes back when I was in junior high, like a normal human being. Orc Attack: Flatulent Rebellion is going all in with the epitome of high brow humor, allowing four co-op players to use their gastric arsenal against the devious humans who poisoned them.

Today we have a few new images and a video you may have or have not seen. The game looks quite good, until the characters collectively crap themselves. Call me old fashioned, but I think four murderous orcs dual wielding oversized axes, clubs, swords, and other assorted chump-whackers questing to kill up any and all puny humans would be enough to make a pretty boss game. I might not be their target audience.

You be the judge.

See what I mean? Orc Attack looks like good, clean, co-op fun for up to four players right up until the burping and farting starts. Hell, it still looks fun even after the fact. Developer Casual Brothers' Kickstarter fizzled in December, garnering little more than half the requested funding. The game has been submitted to Steam's Greenlight program, so go do whatever it is that people do to support games on Greenlight. You can always donate to the team directly, if you're into the whole farts-are-super-powers thing. I won't judge.

Orc Attack:Flatulent Rebellion supports four player local co-op and four player online co-op. It still doesn't have a release date. According to the game's website it's being developed for the Xbox Live Arcade, PlayStation Store, PlayStation Vita, and PC.