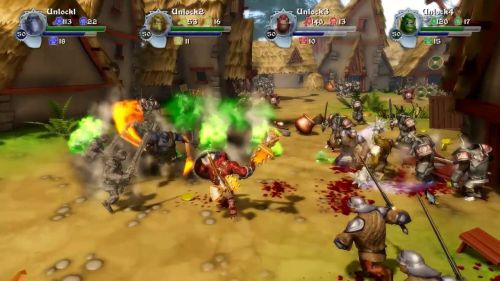 It's been a while since we mentioned Orc Attack, a 4-player brawler that's loaded with flatulence and other humor based around the grossness of orcs. Developer Casual Brothers continues to plug away at all four versions of the game, but the PC version in particular needs gamers' help. Steam has recently launched the Steam Greenlight program in which users can vote for games (indie or otherwise) to join the Steam portfolio. So if Orc Attack is ever to see a Steam release, it needs your vote!

Overflowing with Humor and Flatulent Rebellion. Orc Attack is a Third Person cooperative beat-em-up. Hilarious enemies and highly tuned combat make for a joyous experience that really is worth sharing. While the comedic storyline and striking 3D world make it even more memorable. Gross but charming protagonists add the final flourish with flatulent group attacks and nasty killer moves for up to four players.

• Cooperative Combat and Dirty Mode rewards players for working together
• 30+ Enemy Types, Including Bosses
• Raid, Pillage and Plunder Human Camps, Collect Gold to buy improved weapons and armour
• Set Free the Orc Prisoners to Add them to your Horde - Play as any of the 8 Orc Warriors
• Four player local and online multiplayer
• Four Campaigns comprised of 25 Epic Missions
• Reclaim the land for all of Orc-Kind

Some (but not all) of the game's orcs are already quite green, but it's still a good idea to help Orc Attack become greenlit. Steam needs all the beat-em-ups it can get!

The PC version of Orc Attack will support 4-player local and online co-op, just like the XBLA and PSN versions. It's also optimized for controllers, a necessity with local co-op. See this article for more multiplayer details. Orc Attack is due out in late 2012.