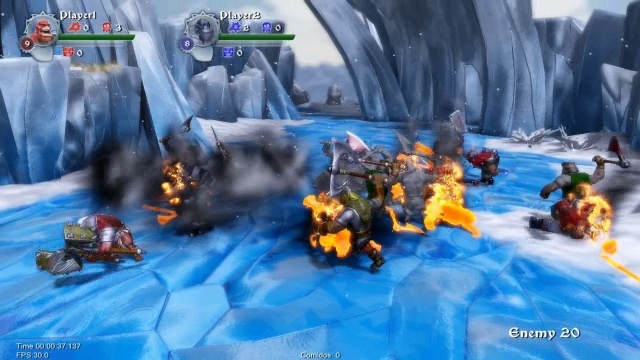 When we first mentioned Orc Attack last week, some readers took issue with the upcoming brawler's abundance of potty humor. From the character names (Lord Poop), to the main characters' burping and farting attacks, Orc Attack certainly includes a lot more 'gas and crass' than other games. Just watch the trailer (included after the break) and you'll hear what I mean. UK developer Casual Brothers is not deaf to player concerns, and so they've kindly explained the importance of Orc Attack's potty humor to Co-Optimus. Plus we've dug up some info on the game's promising multiplayer features.

We... found some commentaries saying that the game seems a little childish because of the farts and burps the Orcs throw... The fact is that the Orcs have been, in a way, poisoned by the evil machines of the invading human army –noisy and smoky machines used to exploit the natural resources of the Orc World, turning the land dirty, the water poisonous, the fruits corrupt and the animals ill. So, when the wild and ingenuous Orc hunters and warriors drank the water [and ate the] fruits and animals, they became ill and many died. But the rest survived with dangerous gastric diseases that made them throw uncontrolled and tremendous farts. Then came the huge human army who crushed the unorganized Orc clans and tribes.

A bunch of ill warriors, hidden in the swamps, always escaping from the evil Orc hunters, meet an old Orc master who show them how to control that tremendous gas power and use it against the evil humans. He also gives the Orc warriors some potions and elixirs to increase their flatulent power so they can produce explosive farts, burps that turns to stone statues the enemies, or that turn they into ice statues also, healing farts and more.

So this is, we could say, a fight for freedom, with the Orcs fighting the evil humans and their machines and robots to free their land from the devastating pollution. Yes, a fight for liberty in which the Orcs use their flatulent powers to clash [with] the even more dirty humans, who are dirty in the worst way, contrary to the Orcs, who are dirty in a way much more natural and wild – and also funny [way]. This dirty mode of fighting, we think perfectly fit with the Orcs, and gives the title better gameplay, as you can, besides using conventional weapons, create explosions and other effects not using magic, but just gas.

Perhaps it sounds a little childish, but remember this Old Orc Dirty Song:

Sometimes you are not alone.

So someone hears the sound.

And sometimes smells the wrong.

So, hold on, ass in pomp, throw long.

Well! Umm, I think that speaks for itself.

Suppose you don't think farts are hilarious, though. Orc Attack still looks like a unique and capable beat-em-up/action game with 4 player co-op. With that in mind, here's a handful of multiplayer details:

Finally, Orc Attack is targetted for a November release. We'll have plenty more updates between now and then, so stay tuned.