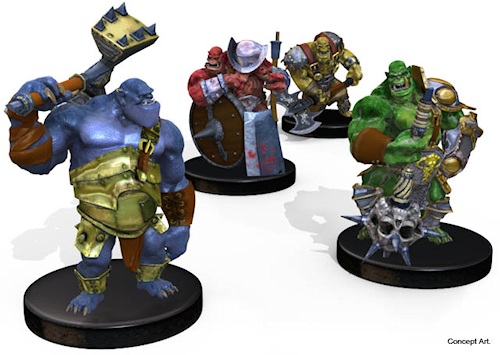 We've been following Orc Attack since its announcement at the beginning of the year. A lighthearted and fantasy themed beat-em-up, it looks like good fun (especially with the addition of "Magic Mode"). The game is already in a playable state, but it looks like UK-based developer Casual Brothers are running low on funds. As such, they've turned to Kickstarter to seek the remaining funds needed to complete their multiplatform game.

The Kickstarter campaign is not without a few quirks. First, the goals and rewards tiers are listed in British pounds instead of US dollars. Apparently Kickstarter doesn't automatically adjust monetary figures for the user's region, which sucks. But the overall goal translates to just under $32,000; not a huge sum. Some of the rewards are quite cool, such as the figurines pictured above or the chance to have your own shield or statue appear in the finished game.

I also noticed the Kickstarter makes no mention of the XBLA version of the game, just the PSN and PC ones. After checking with the developers, the omission appears to come from them feeling unsure of whether they could secure XBLA codes to distribute to backers or not. Other Kickstarter campaigns have successfully promised Xbox Live codes, such as The Pinball Arcade's 'Twilight Zone' and 'Star Trek: The Next Generation' campaigns. Considering that Xbox 360 is the more popular system in North America (especially among co-op fans), let's hope the misunderstanding doesn't hurt the campaign too much.

If you care about Orc Attack coming to market and you don't mind the lack of an XBLA version as a reward, head to the Kickstarter campaign now and pitch in. The project is 25-percent funded already with a month to go, so it stands a fair chance of succeeding.

Orc Attack is targeted for an early 2013 release on XBLA, PSN, and PC. It will support four player co-op both locally and online, plus lots of head-bashing fun.