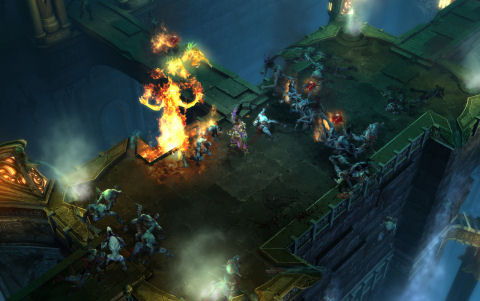 It's been about six months since Diablo 3 was announced.  It's hard to believe we've been dreaming of Wizards, Barbarians, and Witch Doctors that long, isn't it?  The game is still a ways off, it seems, but the steady trickle of information keeps on coming.  1UP sat down with the director of Diablo 3, Jay Wilson, and talked about the development of the game.  Wilson commented that the combat in Diablo 3 was deeper than that of it's predecessor.

1UP: Can you elaborate on your "deeper combat" comment? What makes Diablo 3's combat deeper than its predecessors?

JW: Combat is as deep as the options the designers give themselves. Whenever you add a new capability to a monster -- potentially something that feels unbeatable -- it's more of an opportunity to expand the depth of your characters so they can respond to those threats. A good example would be if you look at Diablo 2: There were a couple of problems with just the power of the characters and the way they were made powerful. A player could run faster than any monster, so you could escape just about any threat. You had endless health and resource -- by resource, I mean mana -- because of potions. And you had the Town Portal, which could instantly get you out of any problem. Those were incredibly powerful mechanics to escape danger and were not class-specific. So every kind of class really had no need for anything like an escape skill or reactionary ability. They simply needed to attack, and if they ever got in over their heads, they simply ran away or drank potions. And it's the same response across the board.

So one of the things we focused on is that response -- 1) setting up scenarios where the players can't easily get out of danger without the use of class-specific skills, and 2) giving them really simple controls to use a broader range of skills without making the game that much more complex to play.

Coming from a co-op perspective, I find the last bit, which I italicized, quite interesting.  Perhaps we are looking at scenarios where a monster might be almost undefeatable with one class, or skill set, but are a cakewalk for another.  Sounds like working together with your friends will be even more effective and exciting in Diablo 3 than in the previous games!  The entire, lengthy interview is at the link below, and a few selected quotes are included after the break.

With the Witch Doctor, I'd say that the Witch Doctor is not a reskinned Necromancer. He has similarities, but I would say no more so than the Hunter and Warlock do in World of WarCraft. Sure, they're both pet classes, but they don't operate the same. For the Witch Doctor, we wanted to create a class whose pets were not his primary source of damage output. Sure, you can build a Necromancer that's not reliant on pets, but most Necromancer builds are very pet heavy. The pets do a lot of the damage, and a lot of mechanics are built around debuffing the enemy so your pets can be better against them or taking advantage of the bodies your pets create by blowing them up with corpse explosion.

I don't want to close the door on bringing back classes from Diablo or Diablo 2; I just don't want to do so with the initial release of Diablo 3. In Diablo 3, all of the classes should do something completely new. Then I'd like us to look back and figure out what gameplay gaps [exist].... Then we'd go back and satisfy our and the fans' nostalgia by pulling back some classes that we think really stood out.

The fourth class is playable in game but is using a placeholder model -- one of an NPC, actually. And all of the skills are what we call "programmer art" because we haven't implemented actual skill effects. So that one is just in gameplay testing for us while we determine signature skills. The fifth class, we're just about finished concepting it and are about to start building it. We can't use placeholder art, so we're now just going to build a model and start working on the first series of skills for that one. We're actually spending more time on the Witch Doctor, Wizard, and Barbarian because of a big change we made to the skill system that we wanted to [integrate them] with -- so it's mostly just artwork that's going on for the other two classes.