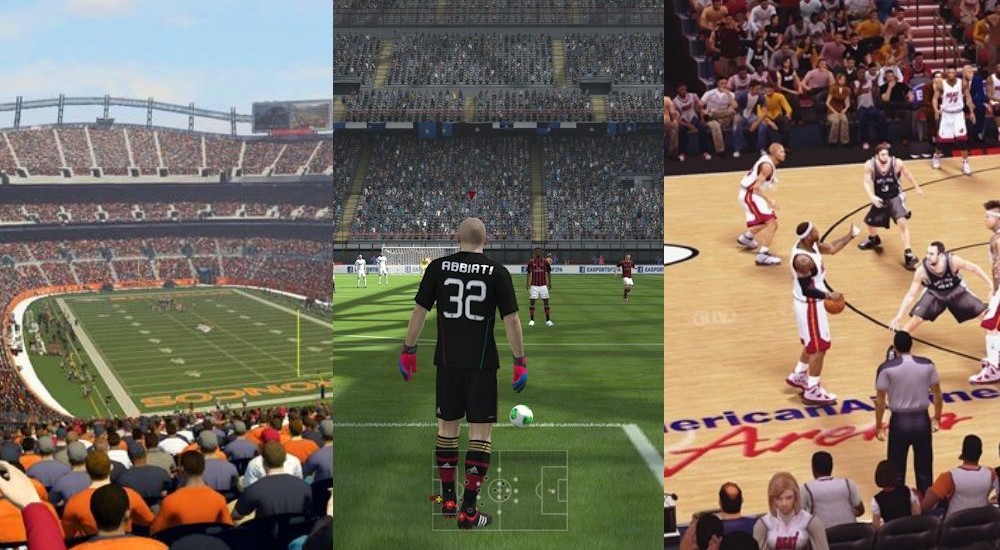 I've always thought that sports games sell next-gen systems. It gives an easy bar to measure the quality of the graphics against. It's something relatable to most people and everyone is always pushing towards the most "realistic" looking graphics possible. Sports games are inherently co-op, usually offering offline co-op for gamers to team up against the computer. We typically only list sports games in our database that have explicit co-op modes; like online franchises, leagues or second screen stuff designed to be played against the computer.

The PlayStation 4 has launched with three big sports titles. While developers and publishers struggle to straddle the boundary between last and next-gen, do any of these push one of gaming's biggest genres forward? The Madden series is perhaps the most popular sports series in America, so there's a large and dedicated audience for this game. Madden's 25th game received mix reviews on the Xbox 360 and PlayStation 3 so things weren't looking good for the next-gen iteration. While I didn't expect a complete reboot, I was hoping for some more improvements to Madden NFL 25 on the PS4.

Graphically there are moments that do look great, during some replays and closeups there are small details like the blades of grass kicking up while players run, or the way the helmets realistically move independent of the player's heads. But the animations still feel cardboard like. It's easy to see some of EA's new technologies like "True Step" at play, but they are in their infancy. The physics between the players just isn't quite right.

Madden does have some positives. The menus are quick and easy to navigate. The controls feel great on the PlayStation 4 and the player momentum system while running is a nice touch. The player faces themselves are a definite improvement and the player models up close really showcase a lot of detail.

If you were expecting a huge step up for this year's Madden you'll be disappointed, but if you're happy with a prettier, slightly enhanced version of the game, you'll get your football fix here. FIFA 14 was the game I was the sports game I was most looking forward to with the PS4 launch. The pre-release trailers sold me on what it was capable of, and as a soccer player myself, I really liked what I saw. Thankfully it looks like EA has delivered here with the biggest sports game in the world.

Graphically FIFA 14 looks great. Whether it's the blades of grass on the pitch, the player models and animation, or the way the ball seems to spin realistically. There are little touches everywhere that just make the game feel more "real." It's the small moments like having a player retrieve a ball out of bounds for a throw in without a break in the action that just bring you into the game much more.

FIFA 14's ball physics are spot on. The ball reacts to every object realistically, it's freed from the old "on a rope" method of being passed between players. The way the ball careens off a player's foot depends on where on that foot the player touches the ball. While it's tough to appreciate this from the default pulled out view, you can really get a sense of what is happening during replays. This is when you get to see how truly beautiful this game is. Is there  room for improvement in FIFA 14? Sure. But you'll be hard pressed to find a better soccer experience out there right now. NBA 2k14 is the game you fire up to show of your shiny new $400 investment. Jaws will drop. The intro alone is worth the price of admission. Even the first game you play, which is a quick match of the Spurs vs. Heat with music playing while the game is installing, is something to behold. The NBA 2k games have always look a step above the rest, but what developer Visual Concepts have accomplished here is simply amazing.

The game isn't just a game about basketball, it's an NBA game through and through. You'll find live scores and updates, player ratings adjustments, real highlights and more sprinkled throughout the game. Once you get into the game there's a certain atmosphere that's maintained. It feels like you are playing an actual television broadcast, including court side interviews with real player voices at halftime.

Perhaps the most notable feature in the game is player emotion. Gone are the stoic looking faces of virtual athletes, in its place are realistic reactions to on court action. The first time I played a game with a friend of mine, it was the first thing he noticed. "Holy Shit! He's happy," he said, after his player nailed a 3 pointer and the camera zoomed in to show his reaction.

The game plays great and there's a lot of depth here. I'm not a big follower of basketball so I can't comment on a lot of the intricacies, but hardcore fans should enjoy the ability to run dynamic plays, pick coaching matchups and strategies, and manage substitutions.

NBA 2k14 feels like a glimpse into the future of sports games on the PlayStation 4. It's the kind of game that will sell systems.