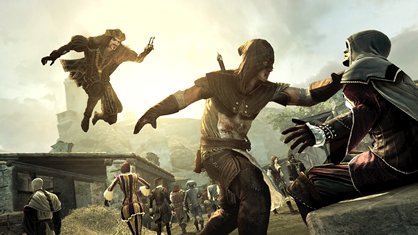 At E3 2010 we checked out a new trailer for Assassin's Creed Brotherhood which looked awfully full of co-op. We were mistaken, and it's a real let-down for some of us. Even as a mode where you just co-op assassinate the bosses, co-op would have been a breath of fresh air for adventure games like this. But, the developers say it just wasn't possible.

At least, not just yet.

We have a problem with co-op. We did consider it, but the thing is, we’ve been considering it since the first Assassin’s Creed. We haven’t justified it yet, and in our universe everything is justified. A subject wouldn’t be able to have two ancestors at the same time. It just doesn’t work in that world. We’re justifying the multiplayer with the Templar universe. That allows us a brand new range of options to tell a different story. We’ll find a way for co-op. It’s going to be there for sure… eventually.

Maybe a vocal co-op community can spark some ideas, or ways to incorporate co-op into the Assassin's series sooner rather than later. Just a thought for that type of community.