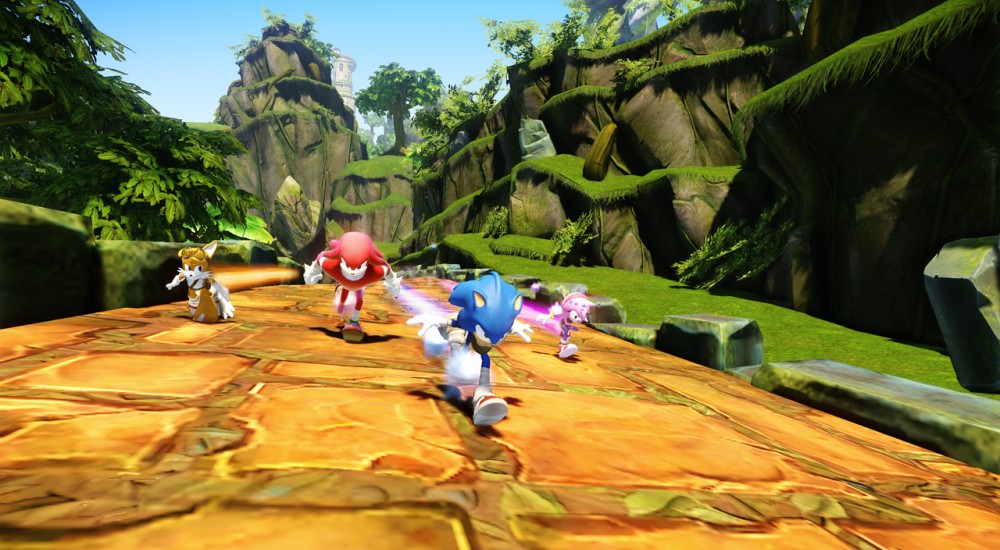 Announced today by Sega, a new Sonic the Hedgehog game called Sonic Boom will try to re-invent modern Sonic for the hungry masses. Will this new imagining be enough to bring the franchise back from the brink?

A team-up of Sega, Big Red Button, and Sanzaru revealed in a New York press event the latest installment in the Sonic franchise, Sonic Boom. Players will be able to take control over Sonic and his traditional crew of characters: Tails, Knuckles, and Amy Rose, as they explore an ancient land never seen before. Much like other games in the series, each one will have their own unique set of skills and attributes, such as Amy Rose with her Piko Piko Hammer weapon or Knuckles with his new found physicality. Using their abilities together as a team, players will need to work together to traverse the lush, but mysterious land presented to them. From the looks of things, Sonic Boom will feature  a two-player co-op main campaign and with other competitive modes to accommodate four-players. Sonic and company are shown to have a energy grapple/tether of sorts that connect them  to the environment for puzzle solving portions and possibly to one another for combination moves (I immediately thought of Knuckles Chaotix for Sega 32x when I saw this). The game is supposedly going to be very teamwork oriented, allowing players to control characters both individually and as a group. Take a quick look at the trailer below:

Releasing alongside the title will also be a new cartoon of the same name "Sonic Boom", found on Cartoon Network in the coming months. Like in the TV show, the game will be focusing on exploration, melee combat, and the series staple of  high-speed travel. As shown in the TV trailer below, Sonic and Tails pull a energy tether maneuver to defeat one of Dr. Eggman's robots. Will this be a common thing to perform in-game? We'll keep our fingers crossed! Design-wise, this isn't nearly the worst looking, modern iteration of Sonic and company imagined by SEGA. The new CG animation definitely looks decent on the TV trailer, but Knuckle's design choices are (by far) the most interesting thing we've seen so far. The game will be using CryEngine 3 technology for the Wii U version, so we'll have to see how they pan out. The 3DS version will look slightly different due to the obvious differences in hardware.

What do you think of the new Sonic look? Does Sonic Boom look promising, or should the "Blue Blur" take an extended vacation?