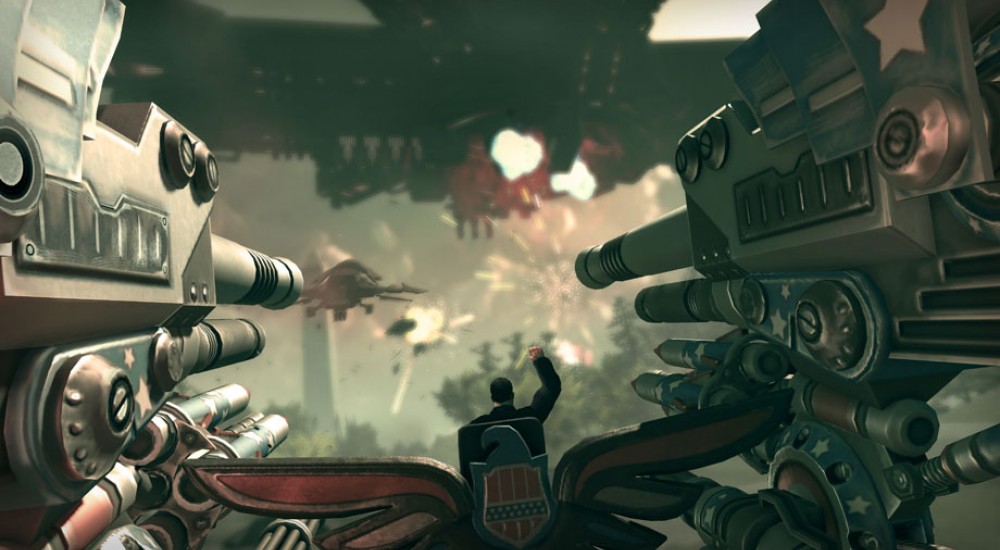 Saints Row IV will be hitting store shelves later this month. The game looks like it will be an interesting extension of the events of Saints Row: The Third. The leader of the Saints (played by you) has parlayed their celebrity status into the Presidency of the United States. I think the whole thing is an allegory for the Reagan years, but I'll have to play more to find out.

That's right, review copies of SRIV are in the wild. I'd tell you more about it, but then the head of Deep Silver PR would dispatch one of her deadly chupacabra assassins. It's kind of her thing. Anyway, back in 2011 I played a lot of  SRTT --I reviewed it, too-- and I found the game ridiculous, but highly enjoyable. I hope the fourth installment can keep up the insanity.

Volition has developed all four Saints Row games. Over the past seven years (Seven years!?!?! Holy $#!# I'm getting old) the franchise has grown from a "me too" criminal sand box game into a Sci-fi/super hero/gonzo/mayhem generator/whatever the hell it is now. The men and women of Volition haven't forgotten where they came from, or who helped get them where they are. I really don't know what that means. I guess I'm trying to say they appreciate their fans and made a video to explain how SRIV was created out of their undying love for you and your $60. Here it is.

I've barely begun my SRIV experience but I can say it touched on being beautifully stupid more than a few times. Its all the more enjoyable with a co-op partner. Does it make sense that there are two POTUSs? Shut up and play the game. There's your sense.

Saints Row IV supports two player online co-op. It will launch on August 20th on the Xbox 360, PlayStation 3 and PC.