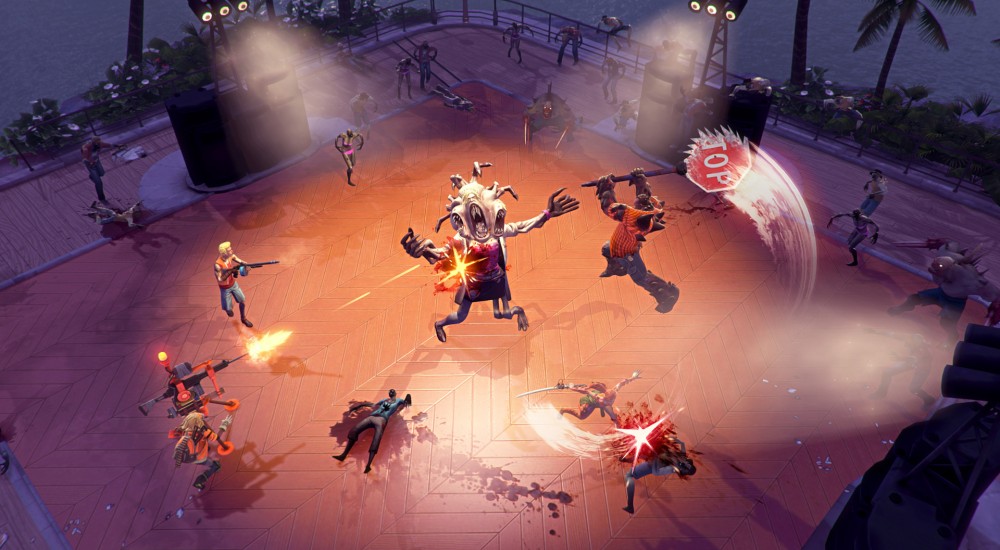 When Dead Island: Epidemic was announced, many scoffed at the change in genre for the franchise. Deep Silver, looking to capitalize on the free to play market, have created a game that blends their series with MOBAs and to some degree, action RPGs. To our surprise there's also a dedicated co-op horde mode built into the game for four players. As these impressions are based on early beta versions of the game, a lot of this could change, but there's a good base here to get an idea what Deep Silver has planned.

Like the Dead Island series that Epidemic is based on, weapons, loot and crafting items are the focus for the free to play game. As you play the game's modes you'll earn weapon parts and blue prints to craft new weapons to bring into the game. On top of this there dozens of characters that you can pick from that each have defined class roles like healer, damage dealer, and support. It appears as if most characters will be locked and you'll earn a form of currency for playing to purchase new ones. There are also skills, boosts, and several other tweaks that can be made to your character to customize it to your liking. One thing I really enjoyed was that all the characters weren't just human, some were mutated. The co-op mode is a survival style mode for four players. You work across a map, capturing a point, and then defending it from waves of zombies. The team is rated and ranked on how fast they can work through the map itself and there are several ways the game tries to slow you down with barricades and doors that must be broken to progress. The waves of zombies are loaded with fodder as well as unique enemies like heavy tanks, zombies that ensare you, and ones that will stun you. The levels culminate with a boss battle against giant zombie creatures.

Players use the WASD keys to move and the mouse to aim and reticule to attack. Your primary attack is bound to the left mouse while limited secondary attack your right. The secondary is charged up using a meter with successful primary attacks. Each blip of the meter means your secondary attack can and will cause more damage. Players always have a melee and a ranged weapons, which are chosen before a mission. There doesn't appear to be a way to upgrade or change your weapons during either of the gameplay modes.

Overall the action is pretty fast paced in the co-op mode as you race against a clock to capture a certain number of supply points as fast possible. The game ranks you on bronze, silver and gold status and it is possible for the entire team to die and restart and still get one of these medals from the last supply point. Teamwork is crucial with players able to revive, cover, and draw aggro from the swarms of zombies that come from all over the place. It's a fun little mode for sure and it appears you can earn all sorts of goodies just playing this without touching the competitive aspect. The other game play type in Dead Island: Epidemic is a MOBA inspired versus mode that pits 3 teams of four players against each other. Once again you'll be trying to capture points for supplies throughout the map and fend off zombie attacks at the same time, but you'll also have to worry about at least two other teams trying to do the same. As you capture points you'll earn supplies and these are brought back to a main base which contributes to your overall score to win the level.

The supply mode is definitely unique and you can see the influence from several genres, but I felt the player vs player combat wasn't quite as satisfying as I'd like. Obviously it's really early here in the beta, but the actual act of attacking the other player just seemed to lack a certain punch. Still the overall strategy that will come into play during this mode should present some really interesting opportunities. There's also quite a bit to worry about - between taking supplies back to base, capturing points, the other team, and the swarms of zombies and specials - it can be a bit overwhelming. Perhaps though, that's sort of the point.

All of the modes will give players coins and XP to buy new characters, skins, upgrades, and one time use items for their matches. The free to play arena is definitely growing more and more crowded, but Dead Island: Epidemic does a great job of separating itself from other MMOs and MOBAs out there. The game is still in a close beta state but you should see it open up soon. Until then take a gander at some video impressions of the co-op mode.