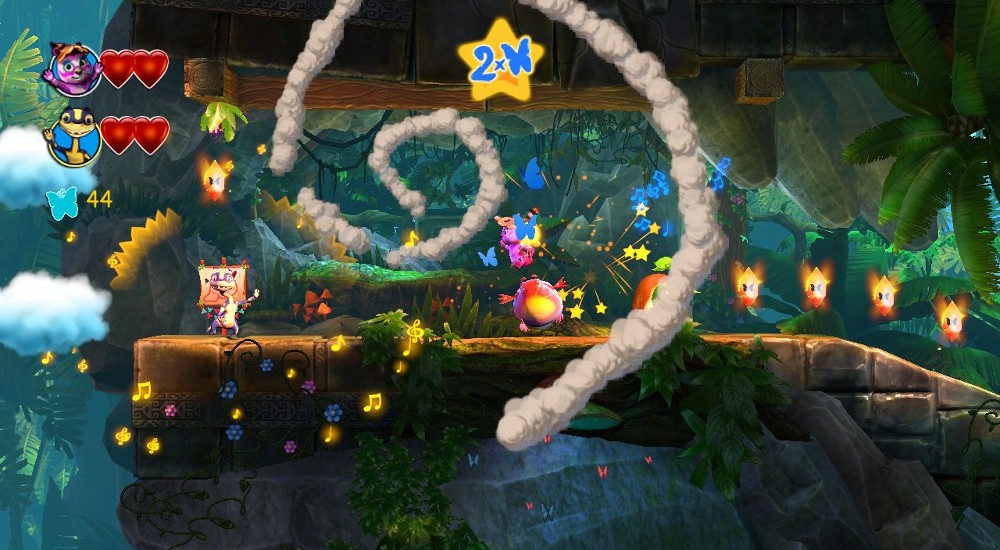 Hop and stomp gameplay starring a lizard and a panda. Makes perfect sense! Recently announced by Flying Wild Hog studios, Juju and Peyo is an upcoming retro-themed platform game that's more colorful than a mantis shrimp's crayon collection. It's got co-op, too, which is another reason why we're looking forward to it!

Juju's father Jambee is out doing his daily chores when a terrible ancient spirit is released. He leaps into battle, which doesn't do him a lot of good seeing as how this is a terrible and ancient spirit. Before he's taken away he manages to pass a magical mask to his son. Now Juju and his buddy Peyo are on a quest to gather the mystic keys so they can seal the spirit away and rescue Juju's father.

Juju and Peyo is described as a family-friendly adventure. The story and setting are lighthearted and whimsical, the artwork colorful, and the co-op designed so the second player can jump in or out at any time. No pressure, just jumping around, collecting stuff and having a good old fashioned time.

Juju and Peyo is a far cry from Flying Wild Hog's previous games. If you can remember back to 2011, the team pushed out a futuristic first person shooter called Hard Reset that tried to do something a little different with the genre. It was followed a few months later by the Exile expansion. The team also released a Shadow Warrior remake in the fall of 2013, adding another single player first person shooter to their lineup. Juju and Peyo is obviously a departure from the gritty molds that came before it, but we're willing to bet it still draws inspiration from all the old platform games from a decade or two ago.

Juju and Peyo is scheduled for release on PC in the fall of 2014. Console releases are also planned, but no details have been nailed down just yet.