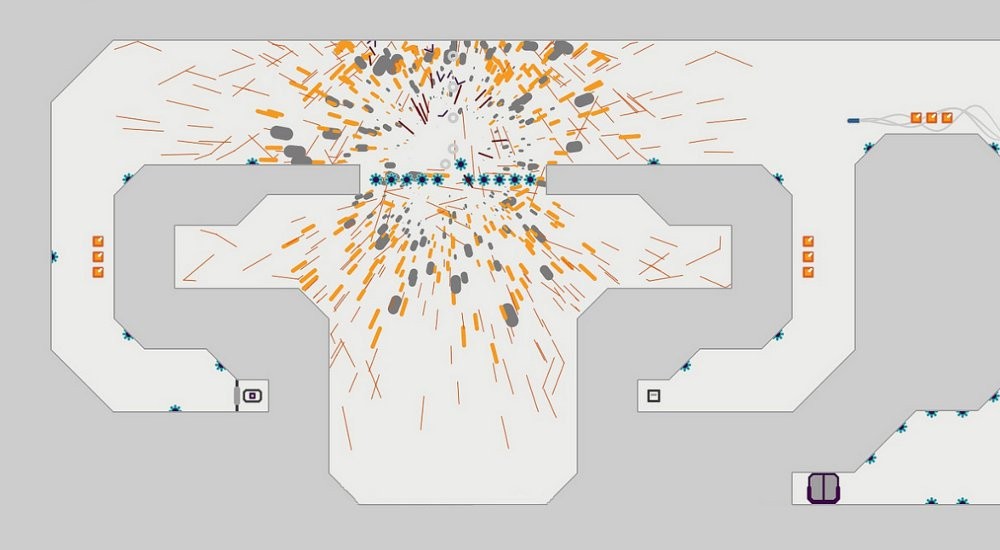 How do you update a game that looks like it could be at home on an Atari console so it looks gorgeous on next-gen hardware? Let's ask Metanet! The team has been hard at work on N++, an updated and prettified version of the ultra-tough platform game that's been rattling around for several years. And you know what? It actually does look pretty good.

Like its predecessors, N++ is all about inertia and motion. And jumping, wall grappling, coin collecting, and explosions. And co-op! The game started out as a browser release that sent players through stark grayscale levels where they would leap between dangerous things to gather coins. Over the years it's grown into... ok, well the core idea is largely the same, but there's way more of it, including new modes, tons of new levels and much more. And it's still extremely fun with a friend.

One of the main inspirations for the visual design of N++ was print graphics. You know, the thing we used to do with words and pictures before we had iPads to display them on. Smooth blocks of color and sharp edges dominate the new layout, giving it a refined, stylish look that isn't quite like most games out there. Designer MASA was brought on board to help with the redesign, and he took things a bit further with the new logo inspired by abstract typographical art.

Metanet's blog post goes into extensive technical detail about why games look jaggy and the lengths they've gone to to make sure N++ looks amazing. It's easy to think of flat colors and simple shapes as being something a graphing calculator could do, but once the game gets moving it's apparent that decent hardware really is handy when running hand-crafted vector graphics at a steady 60fps in 1080p.