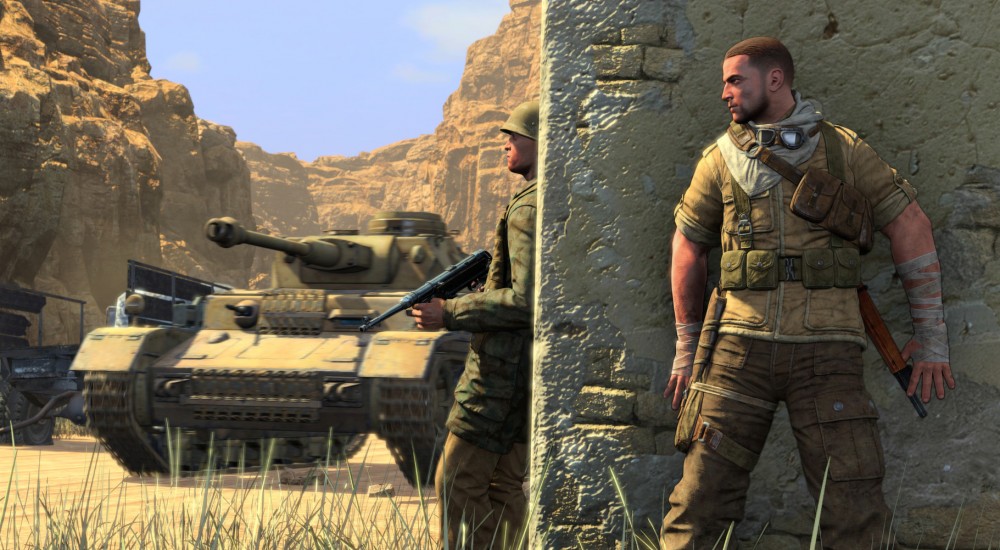 The release of Sniper Elite 3 may just be around the corner, but that didn't stop 505 Games from showing off the co-op modes at E3. I got a hands on, partnered with Co-Optimus Managing Editor Nick Puleo, and we were able take on a small part of the campaign.

Tasked with assaulting and clearing an enemy camp in Africa, while doing our best to remain undetected, we used our binoculars to first tag those we wanted to eliminate first. This technique is incredibly useful as both players can see all tagged enemies, so it's easy to communicate who needs to die, and who can wait for their inevitable end. The first couple of enemies I took out I did so silently with my knife. Not necessarily the work of a sniper, but I didn't want to alert the entire camp of my position with a single booming shot. Eventually it was time to play the name of the game, so Nick and I set up vantage points and began picking off our enemies from afar. After quickly taking down three soldiers, I missed a fourth who was able to spot me and alerted the rest of his squad - we were in trouble. Nick was in a position to cover me from a distance, but my only option was to fight in mid-range combat, or die. Luckily this elite sniper is also handy with assault rifles, and by taking cover and communicating to one another where our enemies were, we both survived the fight - barely. Overtaken by surprise, I was down, and Nick had to run from his vantage point to revive me, but not before executing a slick takedown of the fool who shot me.

The next group of enemies did not go as well - for me at least. Immediately spotted, and running low on ammo, it was a mad dash to take down foes and use their own weapons against them. Nick however, lagging behind because he was talking to developers, was able to stay back and snipe throughout the whole ordeal. Taking his time, he landed several kill cam slow shots, piecing skulls with lead in a brutal and beautiful fashion. This devolved into me barely hitting any enemies, but instead drawing their fire while Nick took them out one by one.

When I went down, the game alerted Nick to my position so I was able to be revived and placed back into action. As we proceeded from the first set of objectives of gathering intel on target locations, to the actual target locations we spotted a new feature for the game - destroyable vehicles. We timed our assault carefully with one player lining up the shot on a truck centered around a few guards and the other across from it to take out the stragglers. The plan didn't go quite as expected as the guards became alerted sooner than we hoped, but the destruction of the vehicle, complete with slow motion cam through the engine block, helped alleviate the pressure. There's an expansive inventory system in Sniper Elite 3 that we didn't have the time to dig into. It's possible to craft traps and lure enemies away from their allies for easy takedowns. The developer told us his favorite new toy is the flint which allows you to create fires in areas around the map to draw enemies in. You can also sabotage machinery to mask the sound of your gunfire, ensuring stealthy kills to those with perfect timing.

Though we played the campaign (which can also be played solo), there are two other co-op modes; one has a single player sniping while the second player spots from mid-range and provides defense, and the other allows both players to work together as a sniping duo. You can also team up for wave-based survival.

Sniper Elite 3 launches June 27th for PC and is currently available for pre-purchase on Steam. The game will also be out on Xbox One, PlayStation 4, Xbox 360 and PlayStation 3 early in July.