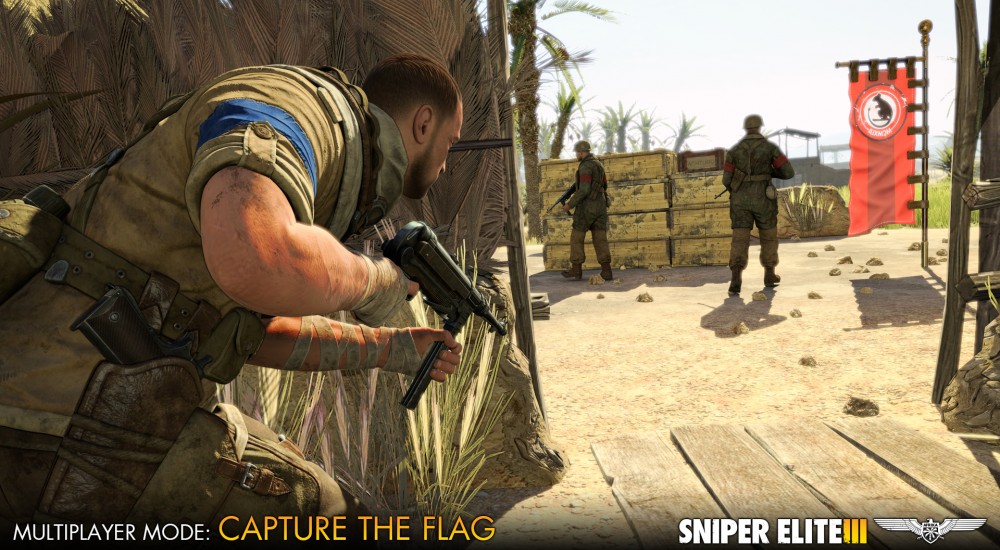 A whole slew of Sniper Elite 3 DLC content to finish up the game's add-ons. Now completely free on Steam, the fourth DLC contains an all new map, "Outpost Canyon" and the final Weapon Pack, "Axis". Furthermore, the final Campaign DLC for "Save Churchill" has also arrived!

"Outpost Canyon" places players in the Atlas Mountains, where the Battle of Kasserine Pass had taken place in 1943. According to the press release, "Ominously deserted, the map is littered with evidence of previous skirmishes for what was once a crucial supply line for German forces; forgotten artillery positions and the scorched remains of vehicles mark the undulating landscape, ridges and barren river-bed." The "Axis Weapon Pack" will include weapons that normally the enemies would wield, including various German, Italian, and Japanese guns for you to wield. These weapons include: - MAB 38 submachine gun: Italian made with great range, zoom, and rate of fire

- Army Pistol 38: A German semi-automatic pistol with a strong rate of fire and awesome range.

This update will be coming to PS4, PS3, Xbox One, and Xbox 360 later on this month, so stay tuned.

Additionally, the conclusion to the three part Campaign DLC, "Save Churchill", has now arrived. With the final mission now in sight, we can finally end what seems to be one of the bloodiest sniper campaigns in video game history. This DLC also comes with a brand new multiplayer mode update to even things out. Just like the other DLC, this update is only for Steam users and will be coming to the consoles at a later date (October 1st at the latest).

Save Churchill Part 3: Confrontation is the final episode and conclusion to the explosive Save Churchill campaign for Sniper Elite 3, featuring the largest environment ever seen in the series.

German sniper, Raubvogel lies in wait to ambush Churchill’s convoy en-route to the Casablanca Conference. Fight your way through the Axis barricades scattered amongst the foothills, move up into the mountains, flank the enemy encampments and begin your final ascent up the mountain to confront Raubvogel in an epic sniper duel that could decide the fate of a continent.

Stop Winston Churchill’s assassin before it’s too late! One bullet can change history...

Capture the Flag has returned to the Sniper Elite series, offering players an objective focussed game with more speed and teamwork based gameplay.

Good snipers are still key to victory, but players will need to co-ordinate together to successfully assault the enemy base and capture the flag, relying on each other to protect the flag bearer and their own base from enemy attacks.

The fifth FREE multiplayer map for Sniper Elite 3 players on all platforms, Night Watch is one of the most challenging maps in the series. Taking players to an oasis shrouded in darkness, the ruins of an old town turned into a makeshift camp for enemy troops.

Two opposing watch towers provide the best sniping opportunities but also carry the highest risk, whereas vegetation on the water front can provide snipers with a place to hide from enemy scopes. The oasis itself provides a choke point as players close in on each other to take new positions and create sniping opportunities.

It's been one hell of a summer for Sniper Elite 3, but all the DLC's are finally out (on PC anyway) so we can sit back and experience all that the game has to offer. Currently, Sniper Elite is on sale this weekend on Steam celebrating the occasion, as well as Rebellion's own storefront. Grab the regular game for 33% off the regular price on Steam, or make your way onto the Rebellion Gamestore to purchase the or the Limited Special Edition also for 33% off.