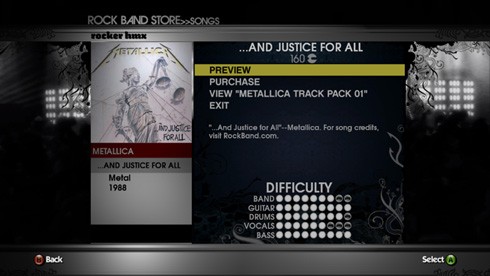 Tipster Kielaran sent in this 1UP article, which reports that MTV and EA want to expand on the Rock Band series' 600+ song lineup...a LOT.

According to EA's worldwide executive of music and marketing Steve Schnur, the Rock Band Store could see over 5,000 total songs by the end of 2009. As Kielaran pointed out to us, that's over 400 songs per month.

We've heard ridiculous claims before, but when you're looking at the numbers (Rock Band as a series has reportedly sold 108 million downloadable songs, compared to the Guitar Hero series' 22 million), it seems logical.

We'll see if they can make good on their ambitions. In the meantime, I'm crying because despite having an absolute blast with Guitar Hero III on PlayStation 2, I still haven't picked up a music game for my Xbox 360...and at this rate, I may never catch up!