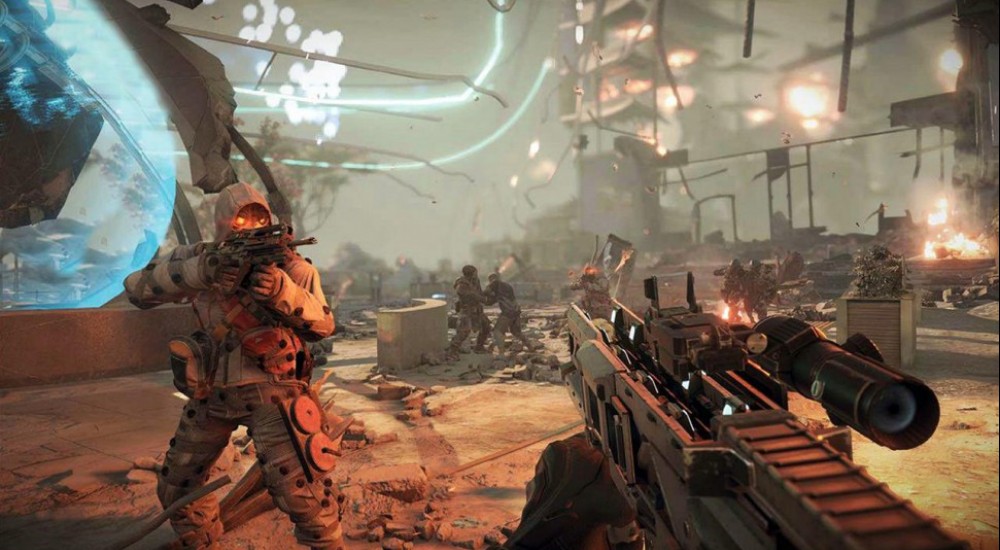 Killzone: Shadow Fall launched with the PlayStation 4 last year and was arguably the lead title for the platform, though it was met with mostly mediocre reviews. Sadly, we had to wait almost eight months for the co-op mode, Intercept, that was announced prior to its release to finally arrive. Was it worth the long wait? Read on to find out.

Included in the Intercept premium content ($10 for non-Season Pass holders) is five maps, four classes, and three different match types that have little bearing other than match length. The basic concept of co-op in Shadow Fall is sound: gather up a team of allies, pick from one of four classes, and defend strategic points from enemy combatants until the pre-determined number of points have been accrued. There four classes from which you and your squadmates can choose from: Medic, Assault, Sniper, and Tactician, with each class containing their own abilities and gear. For instance, the medic can only carry one main gun and is the only one that can heal or resurrect their teammates. The tactician can drop turrets, the sniper covers from a distance, and the assault is the most straightforward class of all with an assault rifle and grenades. All four classes serve a crucial role in completing missions.

The previously mentioned "strategic points" that players are tasked with capturing are a group of three nodes on a map. As time ticks by, the team slowly accrues points as long as they maintain control of them. This isn't easy as waves of enemy forces spawn at different intervals to attempt to wrestle control away from you and your team. Those forces only have to capture one node to halt the progression of points, and capturing a second means you lose points. That has a bigger impact than just making the match last longer. Points are important because not only do they govern your ability to continue in the match, they also determine when the match ends. Victory in a co-op match is achieved when the team accrues a total of either 1500, 3000, or 10,000 points, depending on the match type (Quick, Normal, Long). Not only do you have the hordes of enemies looking to steal those nodes (and points) away from you, but any teammate that dies that is not revived by the Medic, or if the Medic himself dies, will have to pay 50 points to respawn. Players that join the match later on also have to pay 50 points from the collective pool to join. It doesn't seem like much, but those points aren't easily won.

Fortunately, holding the supply points aren't the only way to earn points; kills, actions with style (double kills, heals, grenade kills, defense, etc) all earn you extra points. All points that are accrued, regardless of the method, must be "banked" to be earned. A small circle exists in your base where you can bank these points. There's a risk vs reward scenario at play, though. Every three minutes or so a multiplier will tick up. This timer continually ticks down as long as no one banks any points, so the longer you hold onto the points, the more banking them will be worth. The flip side is that if you or a teammate dies, you lose a portion of those points.