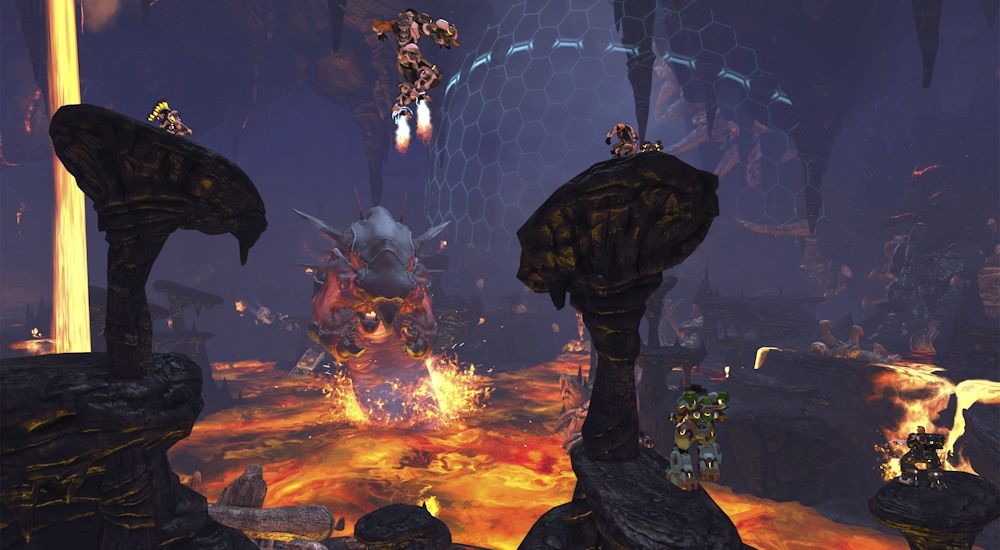 Our first article for Firefall was written in September of 2010 - almost a full four years ago. At that point the game had already been well into development and we were seeing the fruits of the team's labor. Now the game is ready to finally be called "done," at least terms of being an officially released product. The game launches today on PC and is available on Steam and from the official website.

Obviously with such a lengthy development and beta period, people wonder what was up. The simple answer is this - the team at Red 5 wanted to utilize community feedback as much as possible.

We designed a game with an extremely passionate and talented team. But Firefall wasn't complete until we were able to incorporate the invaluable feedback from our enthusiastic community during the beta period. Firefall is as much their game as it is ours.

With the launch comes a new mode of co-op content, 20 man raids against huge Melding Titans. There are two titans right now, Boneclaw and Kanaloa, each offer a different and unique style of combat to defeat as well as visually impressive areas where the battles take place.  Check out the video from the Firefall YouTube channel that showcases Kanaloa.

If you're curious about the free to play aspect of the game, we wrote up a FAQ last year. Some of the info might be a little out dated, but most still holds true. We'll likely be streaming some of the game in the near future.

If you're looking to spend some money on the game, special Firefall Launch Packs are also available for purchase, which will include items ranging from an exclusive multiplayer vehicle to a digital soundtrack and a concept art-book.