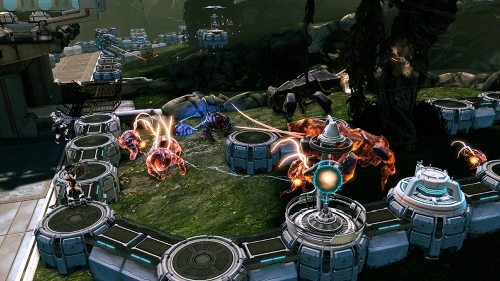 Raise your hand if you were just thinking "Hey, I'd like to shoot some giant alien insect things using an upgradeable electro-gun with my friends this weekend, but I don't want to pay any money to do so, but if I did I'd like to pay something like 85% less." Boy do we have a coincidence for you.

Coffee Stain Studios' first person shooter / tower defense hybrid Sanctum 2 is free to play on Steam this weekend, starting from the moment you open your client and lasting until Sunday at 1 p.m. PST. That's not an enormous amount of time, but if you've ever been curious about the game or the series, this weekend is your chance to see what all the fuss is about.

After getting throughly hooked on the superb combination of strategy/action the game presents, happy players will notice Sanctum 2 and all of its DLC and skin packs are on sale for 85% off. For a single copy of the base game, that's about $2.24 of the American dollars. You can also grab a four pack for the same discount, as well as the Sanctum 2 Complete Pack that contains every piece of DLC and expansion released for the game. The sales stick around until August 18th, so you have a little extra time to make up your mind. Venti coffee or co-op alien shooting? Let's ask our Sanctum 2 co-op review to see what it says!

Sanctum 2 supports online co-op for up to four players. It also happens to be available via Xbox Live Arcade and the PlayStation Network, but there's no sweet sale or free weekend there. Sorry, consoles!