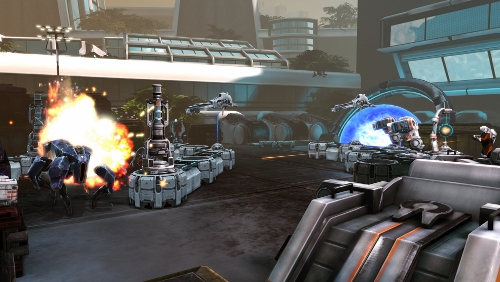 The tower defense/FPS hybrid Sanctum turned more than a few heads when it was released in 2011. It got enough attention that developer Coffee Stain Studios announced a sequel the very next year and has been hard at work ever since, building the game's engine anew and incorporating loads of player feedback. Now, Sanctum 2 is being teased out in small doses, and the first delivery includes just enough eye candy to get our attention.

The trailer doesn't show any gameplay, unfortunately, but it does give you a feel of what life in the Sanctum trenches is probably like: nonchalant and filled with whistling robots. Co-op play hasn't been officially confirmed, but the original featured online play for up to four players, so it's a safe bet the sequel will include at least that.

Sanctum 2 is scheduled for release later this year on PC, Xbox Live Arcade, and PlayStation Network.