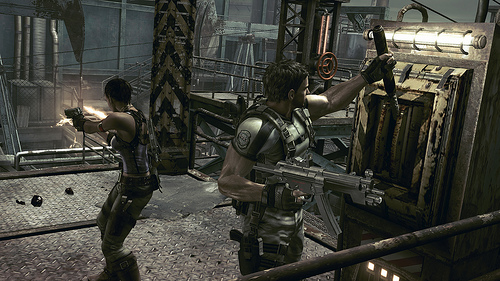 PlayStation 3 owners have a lot of downloading to do if they want to catch up to the Xbox 360's Resident Evil 5 demo count.  Microsoft has released a short press releasing stating that Capcom's controversially controlling co-op game demo has been download 1.8 million times since its release a little less than 2 weeks ago.

This demo was a Gold member exclusive, and according to Microsoft when the demo was released in Japan back in December, over 50% of ALL Gold subscribers had downloaded it.

Despite all the numbers people are still unhappy with the controls, which to some, feel a bit outdated.  Despite that, with a solid 2 player co-op experience that features drop-in and drop-out play, I had a lot of fun with it.

We've contacted PETZ regarding the harmful treatment of all these zombies.  That's the People for the Explosive Treatment of Zombies.