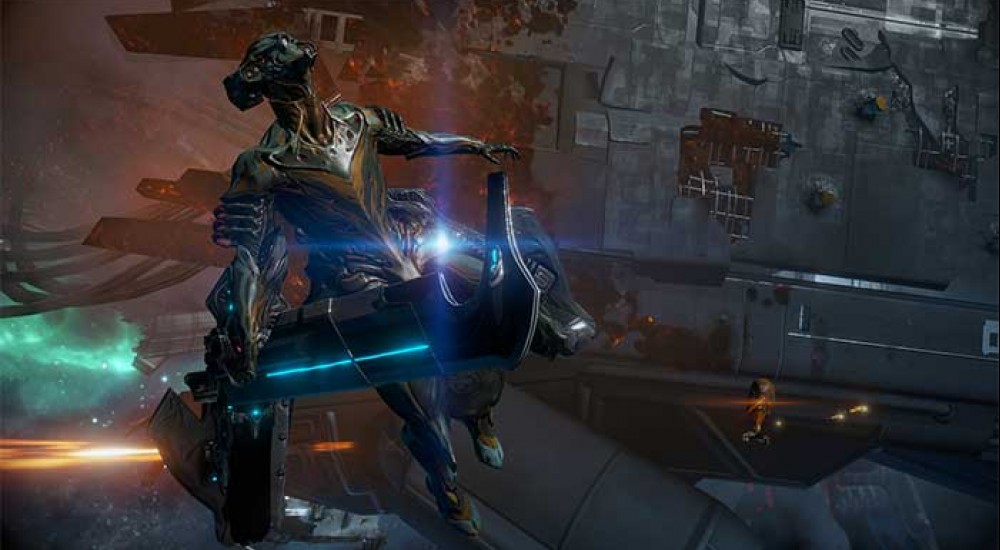 It's time to fly your robot ninjas into the infinite blackness of space. Warframe's new update, entitled "Archwing," finally puts the "space" in "space ninja," and slaps a couple of sweet cyborg wings onto your Tenno. Your ninja-flipping robot can equip themselves with a variety of these Archwings, enabling them to waltz past the walls of their ships and do battle in Zero-G. It's almost like the developers forced themselves to think about how you can make a robot ninja cooler. Simple: make 'em fly.

This new update doesn't just come with a few sets of fancy spacewings. Your Tennos will be packing more firepower as well, with special Archwing-only weapons designed to turn space battles into space "fiery infernos," such as the laser cannon, Opticore. The update also includes a new model Frame as well with Limbo, your new inter-dimensional friend. He's got spells that can drag baddies into whole other worlds, and a killer magic hat. On top of these goodies, the ice planet Corpus is open for visitors, full of new badguys calling themselves the Syndicate, and a reputation based around killing them.

I've been playing Warframe with some friends lately, and it's been a surprising amount of fun. New players won't get to experience the thrill of deep-space combat just yet, but more seasoned ninjas can get to blasting fools in Zero-G immediately.