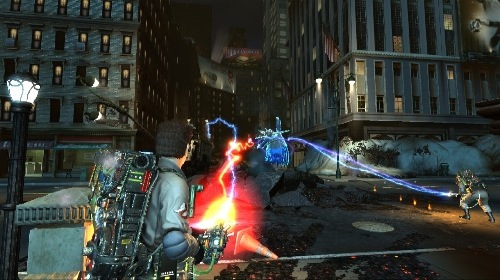 By far one of the more popular titles on the show floor was Ghostbusters from Atari.  With all three systems on display (360, PS3, and Wii) and about six guys cosplaying the crew (their outfits and proton packs were AMAZING) everyone had caught the Ghostbusters fever. Lets talk the Wii version first, since it's actually the only one I got any detailed time with.  The story in the Wii version is identical to the next-gen version, this includes all of the voice acting by the original cast.  The difference is the style of the game, it features slightly over the top graphics with big headed characters, brighter colors, and exaggerated architecture.

Like we mentioned, it features a two player split-screen mode which takes you through the game's story, and each player will play has rookie Ghostbusters.  In the co-op mode you'll be Ghostbuster 5 and Ghostbuster 6 - one male and one female.

While the build on the show floor forced players to have to trap a Ghost in a proton beam and then use various movements to trap them, the newer build of the game uses more "motion queues" to allow you to slam the ghosts into the environment and weaken them, making it a bit easier for players.  Once a ghost is weakened enough it take a flick of the nun chuck to "throw out a trap" and suck em up.  Obviously, doing this is co-op is an 80's child's dream come true. As I talked with Glenn Gamble, the senior artist for the next-gen version of the game, I told him a bit about Co-Optimus and the site.  "Oh, you aren't going to like talking to me."  Son-of-a - "you cut the co-op completely didn't you?"

I proceeded to try to beat the info out of him to no luck.  All I got was the official line - "The co-op mode is going to be something you'd expect a Ghostbusters game to have."  The optimist in me sees this as a possibility that a full story based co-op game will be back.  I'll keep my fingers crossed.

Other than that the next-gen is one of the most gorgeous games I've seen to date.  The Marshmallow man is so real looking you can almost smell him.  I wanted to lick the screen.

Both versions of the game hit in June for the movie's 25th anniversary - expect a demo around the same time.

More hands on impressions are available on Colony of Gamers.