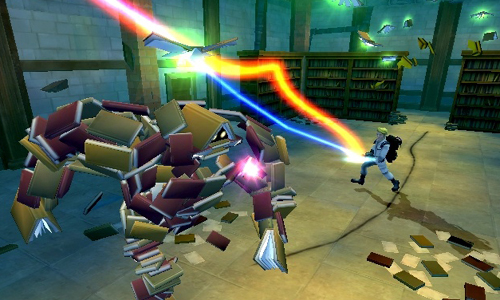 In addition to re-affirming a full two-player co-op campaign on the Wii version of Ghostbusters: The Video Game, MTV's Tracey John gives a lengthy preview of the game's art and control styles sure to please Nintendo Wii owners this summer.

In two-player co-op mode, which lets two players go through the campaign or just certain levels if they wish (missions are selected back at the Firehouse), [damage] is used to compare scores. “We think that destroying stuff is fun so we really wanted to promote the user to do that,” [Atari producer Todd Slepian] said.

Listeners of our bi-monthly Co-Opticast may recall Nick Puleo's positive comments about the competitive co-op scoring in Call of Duty: World at War... Whether side-by-side or online, a little bit of healthy competition toward a common goal seems to be received well by fans of co-op campaigns. According to Slepian, the game has seven or eight missions, and each mission contains between three and five levels. The total game time is about eight to ten hours, but players can go back and re-play levels to find all the collectibles and hidden items.

I also wondered if there would be an online component to the game. “Not now, but maybe on ‘Ghostbusters 2.’”

“Absolutely not!” he said. “But you never know, right?”