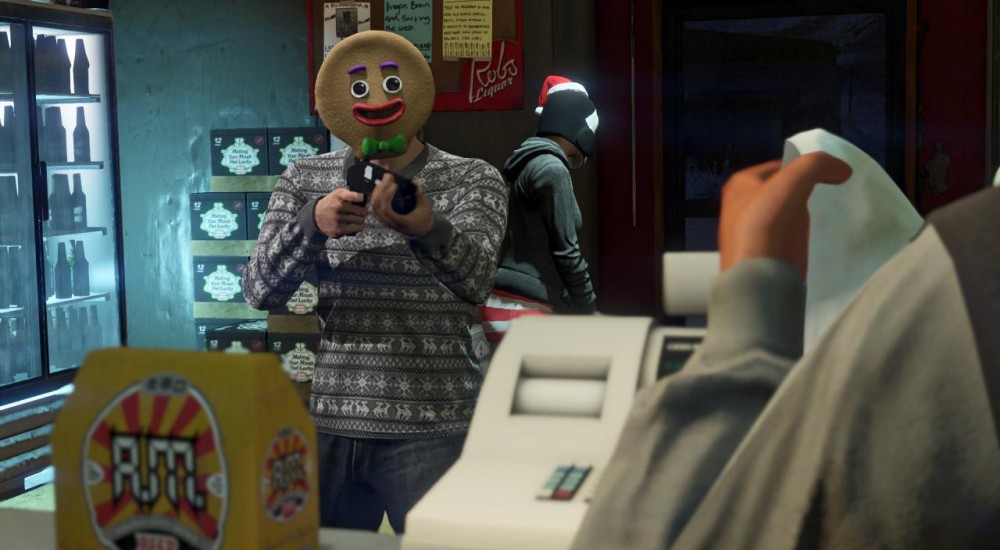 Last week, Rockstar unleashed an explosion of festivity on GTA Online. Players who’d like to get into the holiday spirit can grab some new items and participate in new Christmas themed activities within the “Festive Surprise” Update featured in the latest GTA Title Update. First, we look at what new weapons can be bought at Ammu-Nation stores. First up, and probably the most useful of the bunch, is the personal Homing Missile Launcher! Now, players have the practical means to take out players who decide to be a nuisance while using vehicles, boats, or aircraft (take out those attack choppers!). Just wield the weapon and hold the cursor over your target a few seconds to fire a homing rocket that has a good chance of meeting its mark. Second most useful item would be the Proximity Mines, as they work similarly to the Sticky Bombs but trigger automatically to close contact. This is great for shutting down car drive-bys and laying traps for sneaky opponents (both will stay in gun stores from here on out). New vehicles to purchase are the Hot Rod Christmas Ratloader, the Slam Van, and the Massacaro and Jester sports vehicles. The latter two all have racing skins to really feel like NASCAR came to town. All are permanent in the storefront and won’t disappear at the end of the holidays.There’s also a ton of Christmas themed clothing options at your disposal too, such as ugly sweaters, pajamas, scarves, shoes, etc. By far, the most interesting of them all are the new masks, some of which are just plain creepy (the reindeer). Grab them all for free at any in-game clothing store for free (until January 5th). Finally, some new adverse weather has come to Los Santos and Blaine County in the form of snow effects! Run around the landscape in a winter wonderland, while participating in friendly snowball fight matches with your friends! Don’t let these very rare weather opportunities pass you by!

A few other things to keep an eye out for are the special Holiday Crate Drops that occasionally appear throughout the map. Owning property in the game will also bring more gifts (you are also allowed to own three properties now). There will be a special present in your home underneath the Christmas tree on Christmas Day. Lastly, look out for the specialty Firework Launcher and Firework Launcher Ammo from Christmas Eve through January 5th to celebrate the holidays with style. Free ammo can be obtained on four days: Christmas Eve, Christmas Day, New Year’s Eve, and New Year’s Day.

Rockstar wanted to thank everyone for their patience with the Online Heists to arrive and is hoping this Festive Surprise update will make up for some of the lowered expectations. The heists are said to arrive in early 2015.

“What is the #GTAOnline Heist official release date?” - @iCrazyTeddy
“Why are Heists taking so long?” – Donny (via Mouthoff)

We aren’t ready to give an official release date yet, but we are confident they will be ready early in 2015. As you may have read on IGN, Heists were a much bigger challenge to create than we had originally anticipated. Early versions were simply not good enough and had to be scrapped more than once as we honed in on how we thought they should work. We’re happy to say that the pack we are now finalizing is something we are excited by and eager to release as soon as it is ready. We, as a company, have always been about trying to make something that is good rather than hitting a date. We apologize when this gets frustrating but firmly believe that rushing out second-rate content does not do anyone any favors. Hopefully you agree that yesterday’s new Trailer is a sign that Heists are shaping up nicely, but we still need some time to fine tune them. Because we need a little time to get Heists right, we are going to give you a small Christmas gift to keep you entertained until we are done with them.