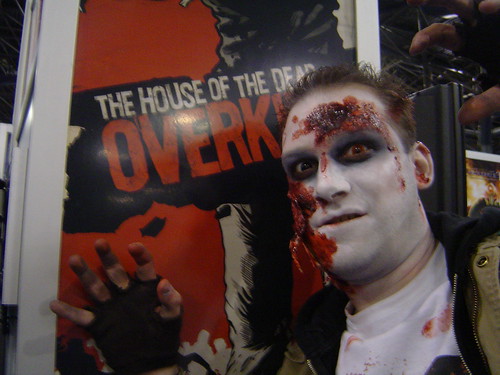 Sega's booth was one of the most active on the NY Comic Con show floor.  Whether that's because they were giving out free t-shirts, or because they had a ton of great games...well that's yet to be seen.  Buried deep within the confines of the booth, hidden behind zombies giving out comics and hugs...yes zombie hugs...was House of the Dead Overkill.  The game is a two player co-op shooter for the Wii, and it's the first House of the Dead game that isn't based on an arcade title.

It was odd not to see the game playable in co-op show on the floor, I mean, after all the game is designed for that.  The Sega folks aren't really breaking the mold either for the game, at least not completely.  While still on rails you'll find yourself able to slightly look past the edges of the screen by moving the aiming cursor there.  This helps you find hidden items and ammo, and perhaps some other surprises.  Is this where the zombie hugs hide?

My cohort in crime during the show commented that the zombies in the game seem to move a bit too slow for a typical House of the Dead game, while this seemed true - it may be a balancing issue with the Wii-mote.  Graphically the game is highly stylized, looking like a 70's horror film, and audibly filled with plenty of funk.  There seems to be plenty of variety with the on screen characters, and I saw numerous environments from indoors to out.

Overall I think you'll find an enjoyable experience here, especially in co-op.  With only days away from release, you'll find out yourself soon enough.  Perhaps Agent G is in need of a zombie hug?